In Their Own Words – Maureen Robinson, Master Blender, Diageo

15 Comments on In Their Own Words – Maureen Robinson, Master Blender, Diageo 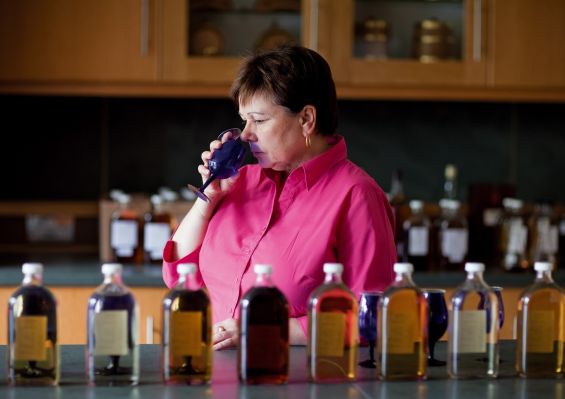 Maureen Robinson is a master blender for Diageo’s whisky team, and is involved in both blended Scotch and single malts, as well as helping to choose the eagerly awaited Special Releases each year. She is also a judge at whisky competitions, and was made a Keeper of the Quaich in 2012. Here, she shares some views on her role:

‘For the first nine years at Diageo, I learned about the science of whisky, then I moved on to working with blends’

‘Seeing something you’ve created is a real thrill’

‘Just now, the thing I really like doing is the Special Releases; it’s such a thrill to find these old whiskies. The idea is to release whiskies from distilleries that are closed, but also to show some experiments from our brands that are unique’

‘Putting a blended whisky together, to me, is like doing a single malt – you have all these flavours coming through. Each of our whiskies has their own character‘

‘How does a new product come about? Normally, we get a brief that we need something new, and I’ll start to think what that could be. I’ll go through lots of samples and mix the whiskies together. Sometimes it might not be how I envisaged it, so then I start playing with different percentages and different woods’

‘As a blender, NAS [Non Age Statement] whiskies open up new horizons. People say NAS means “young whisky”, but it doesn’t – it’s a balance between young and old. I do get a bit annoyed when people dismiss them’

‘Throughout history, there’s always been pressure on whisky stocks, but the current environment now is really healthy’

‘Diageo has a vast stock of whisky; at any one time, it has eight million casks’

‘With blends, sometimes you get it right on the first attempt; sometimes it takes 15!’

In Their Own Words – Maureen Robinson, Master Blender, Diageo https://t.co/vvv7aGvm5I via @whiskyexchange

I don’t dismiss NAS whiskies in terms of their quality, but the “logic” behind their marketing – “age only matters where the industry says it does” – hasn’t got a sensible leg to stand on, which is why many rightly perceive NAS to be the industry double-talk come-on that it is. The only thing that’s sadder is that various whisky “experts” play along with the charade. Supposedly none of them see the paradoxical contradiction, even as they try to stay as “neutral” as possible on the question of whether age actually matters to whisky character and development. So much for the value of “expertise”. If you really don’t know that age matters to whisky, you aren’t an expert on it.

[…] the rest change from year to year. We recently got to try the complete range with master blender Maureen Robinson, so without further ado, here’s this year’s line-up, along with my […]