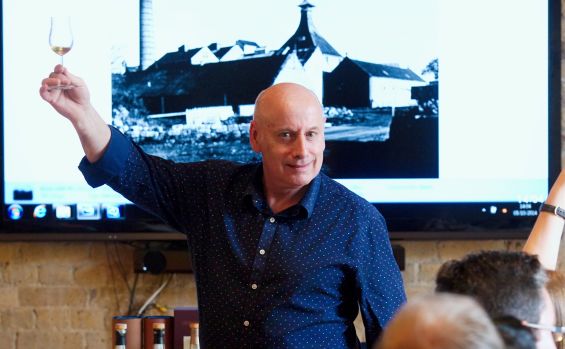 Colin Dunn has done more than most to get people switched on to whisky. After a spell with Suntory, he moved to Diageo in 2008, educating drinkers about the delights of the company’s numerous single malts, as well as the Johnnie Walker range. Here he talks about his life in whisky…

‘When I first tried the Classic Malts, I was amazed how different they all were, and how I needed to know more about them – it was like Howard Carter opening the tomb of Tutankhamun’

‘I’m not Scottish, but I’m Cornish, so there’s a bit of Gaelic there. But people would say “You’re not Scottish, what do you know about whisky?”!’

‘In the early tastings I did, all the people I spoke to were over 50 and male. Trying to teach them how to taste whisky was very difficult’

‘In this country [the UK], Japanese whisky didn’t exist 15 years ago’

‘I still get a buzz trying whiskies from Lark or Kavalan, not just Diageo whiskies’

‘I think of bartenders as alchemists; they create new flavours. We’ve moved on from the Martini and the Mojito’

‘The first time I tried Laphroaig, it put me off whisky for a good 10 minutes!’

‘Cardhu is the most bourbonesque distillery in the Diageo portfolio’

‘I remember the first time I tried Japanese whisky; I realised it was the missing link between bourbon and Scotch’

‘Where will I be in five years’ time? Please welcome Colin Dunn. He used to work for Diageo; now he works for the Cornish Whisky Company!’

In Their Own Words – Colin Dunn, Whisky Ambassador, Diageo https://t.co/fsrXIaR5ge via @whiskyexchange