We run a lot of events through the year, from barrel-top tastings in our shop through to The Whisky Exchange Whisky Show‘s weekend of wonder, but every now and again we do something very different. Whisky Fight Night is one of those.

Take two whisky people, put them in a boxing ring with a guy wearing a Don King wig and another with a sequinned vicar’s outfit, and get them to argue that their whisky is best through a three-round, six-whisky tasting. While wearing boxing gloves. 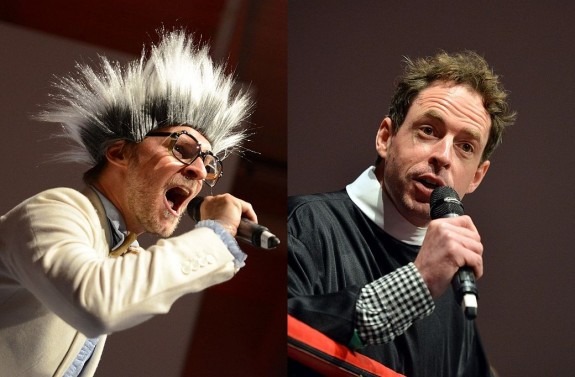 Franchi Ferla and Simon Roser as their alter egos, The Don and Reverend Roser

It’s sprung from the minds of Simon Roser and Franchi Ferla, aka Simply Whisky. It’s the third time they’ve run the event, with the first bout between Simon and Balvenie ambassador Sam ‘Dr Whisky’ Simmons, and the second between Sam and Dalmore master blender Richard Paterson. Sam returned again for this third fight, taking on a new challenger to the title belt, Glenmorangie head of distilling & whisky creation, Dr Bill Lumsden.

It was to be a three-round match, with Bill and Sam each presenting one of their whiskies to the audience, who would try them blind and then vote on their favourite.

We kicked things off with a cocktail reception, which I’ve been reliably told is the usual way of things at a boxing match. We had two whisky cocktails to choose from:

Then the contenders entered the ring… 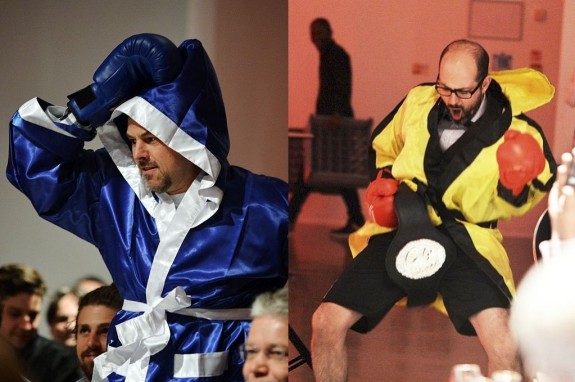 Round one was a face-off between whiskies ‘up to a value of £35 or bottled with no age statement’. Things got heated from the off, with Bill thanking Sam for giving him the chance to try his 17th-favourite single malt whisky again and that same whisky quickly ending up in Bill’s face. 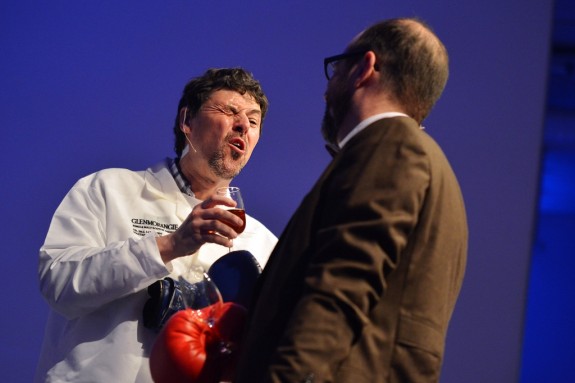 A large glass of Balvenie DoubleWood to the eye

The whiskies in competition were Balvenie 12 Year Old Doublewood and Glenmorangie 12 Year Old Lasanta, both 12 years old and both finished in sherry casks. An even match for the first round, but the choice of winner went to the crowd. Decided by clapometer, Lasanta edged its way to narrow victory.

Before round two started, volunteers were pulled from the audience for a test of physical fitness – star jumps, push-ups and sit-ups. Monkey Shoulder brand ambassador Dean Callan, in the audience to support his William Grant’s stablemate Sam, lost, putting Glenmorangie two points ahead. Team Balvenie clawed back a point due to Sam’s superior performance in the ring, as judged by the Fight Night official judge: St Magdalene collector, Simply Whisky collaborator and occasional train driver, Tomas Karlsson. 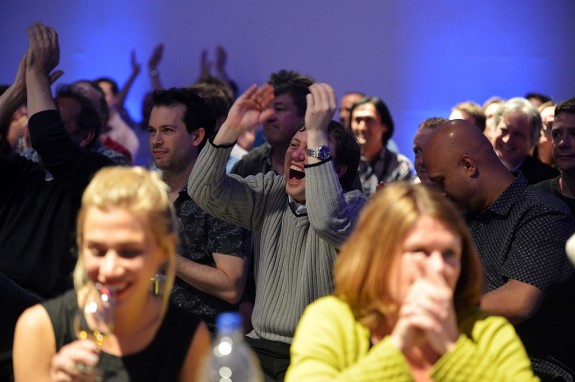 The clapometer had a hard job keeping up with the crowd

Round two upped the whisky game considerably: a single-cask bottling or a wood finish of the contender’s choice. The two whiskies were very different in character this time, with one rich with sherry-cask maturation and the other spicy, fruity and loaded with the vanilla notes of American oak.

The two whiskies were Balvenie 15 Year Old Single Barrel Sherry Cask, the latest addition to their lineup, and Glenmorangie Ealanta, Jim Murray’s World Whisky of the Year 2014. The clapometer was rolled out and the Balvenie took the round. With Dr Bill taking the round-performance point and Balvenie taking the audience participation prize – for the winner of a game of Scottish Roulette, involving five water pistols filled with water and one full of new-make spirit – the score sat at three all, as we went into the final round. 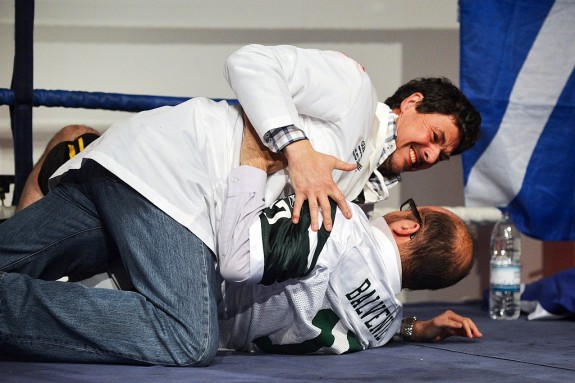 Things got more heated in the final round

Round three was the ‘bare-knuckle dramming’ round. The gloves were off, and the fighters could choose anything from their respective ranges. Again, the spirits were very different, with one full of rich dried fruit and the other packed with chocolate and coffee.

Sam had chosen Balvenie 21 Year Old Portwood, while Bill went for Glenmorangie Signet, a Lumsden creation that uses heavily roasted ‘chocolate’ malt in the recipe. A very close result on the clapometer gave the round to Balvenie, and a draw from the ring official gave them a one-point lead. Volunteers from the audience were selected for a round of Malt Mastermind to award the final point of the match. At first it seemed that Balvenie had won, due to an unsuccesful attempt to name all of the ‘sixteen men of Tain’, but after protests from the audience, the final point was awarded to Glenmorangie.

It was a draw.

In the world of Whisky Fight Night, a draw is a perfectly valid result, but the crowd were not satisfied – they demanded a winner. There was only one way to decide things: an arm wrestle. 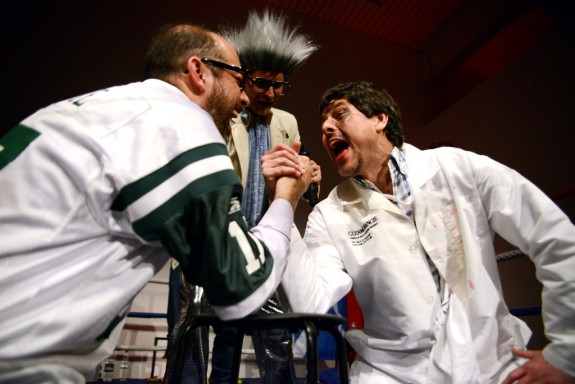 ‘This is how we settle things north of the border’

Weakened by Dr Bill’s assaults through the evening, Sam faltered, and with a slam of fists to mat, Glenmorangie took the belt.

A new champion has been chosen. Who will challenge him at the next Whisky Fight Night? 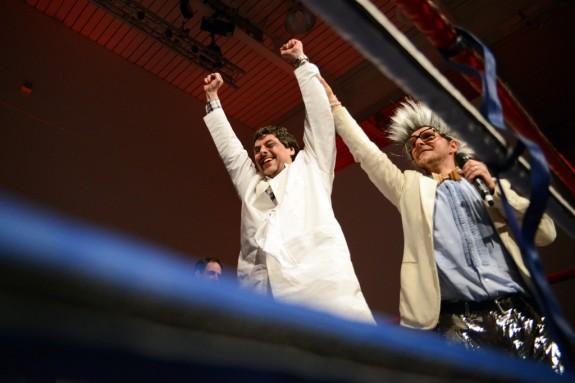 I feel like I’m none the wiser as to what happened, but I suspect the outcome would’ve been the same had I been able to make it to the event. Good work, all involved. Keep doing that beautiful, mysterious thing.