Chances are you’ve heard of Chartreuse, even if you’ve never tasted it. A staple of many of my generation’s parents’ and grandparents’ drinks cabinets, it’s been referenced in films from Alfred Hitchcock’s The Lady Vanishes to Quentin Tarantino’s Death Proof, where his character Warren says: ‘Chartreuse, the only liqueur so good they named a colour after it.’ 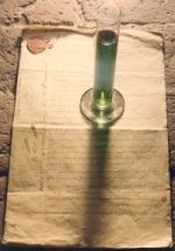 The original recipe for the herbal elixir, dating from 1605

The famous liqueur can trace its origins to 1605 when French diplomat François Hannibal d’Estrées gifted a manuscript to the silent order of Carthusian monks at their monastery in Vauvert (near Paris), setting out instructions for the production of a herbal elixir. Sent to the headquarters of the order, La Grande-Chartreuse monastery in Isère, south-west France, the recipe was so complex that it took more than 130 years to decipher, and Elixir Végétal de la Grande-Chartreuse was not produced until 1737. Originally intended as a medicinal tonic, its popularity grew in the local area, resulting in the recipe being adapted to produce the brand’s two best-known variants, which soon became known throughout the western world – the easier-drinking Green Chartreuse in 1764 and then the sweeter, lower-strength Yellow Chartreuse in 1838, coloured with saffron.

The Chartreuse Order has had a complex history, with many difficult periods. The Carthusians were forced into a 23-year exile due to the French Revolution of the 1790s, only to be banished once again in 1903 when the French government nationalised the distillery at Fourvoirie, near to the monastery. The distilling monks, presumably having had enough of the instability caused by exile, set up a new distillery in Tarragona in Catalonia, Spain. Although the monks returned to France less than 20 years later – with the current distillery at Voiron (15 miles from the monastery) opening in 1935 – Chartreuse was made in both countries until the Spanish distillery was closed in 1989. We have examples going back to the 1930s on our site, including some from the Tarragona era.

The Chartreuse liqueurs continue to be made by the Carthusian monks, of which only two – currently Dom Benoît and Brother Jean-Jacques are entrusted with the names and proportions of more than 130 herbs and plants in the recipe. Today, the Chartreuse range also includes fruit liqueurs, but the emphasis is very much on the original elixir recipe, which continues to be made in silence, as it has been for more than 275 years. Having been inspired to try them (as many have before me) by finding an old bottle at the back of a cupboard, here are my thoughts:

Produced to the original recipe in the 1605 manuscript, this was the original elixir, and has been made since 1737.

Nose: Like falling face-first into a herb garden. Dill, caraway, mint, basil and oregano are all present.

Palate: Undiluted, it shows an incredibly concentrated herbaceousness, but the alcohol isn’t overpowering. With water added (to bring it down to around 40% abv), a sweeter eucalyptus note appears.

Finish: Long, medicinal, and herby, with a dry mint-toothpaste sensation at the very end.

Comment: I can understand why it was created as a reviving tonic. It’s very herbal and shows a medicinal flavour profile. For me, it is too pungent neat, and needs water to open up.

Serving suggestion: Add a few drops of sugar syrup – the sweetness and the herbaceousness complement each other perfectly.

Introduced in 1764 for drinking rather than as a tonic, milder and lower in strength than the original, this made Chartreuse famous outside its local region.

Nose: The resemblance to the Elixir Végétal is immediately obvious, but with the intensity toned down. Mint, caraway and basil stand out.

Palate: As with the nose, it’s a toned-down version of the original recipe, with an enticing mintiness.

Finish: Medium in length with the mint joined by sweet eucalyptus.

Comment: Chartreuse Green is very similar to mixing Elixir Végétal with sugared water (as mentioned above), but without the same pungency.

Serving suggestion: A versatile liqueur, add one part to nine parts Fentimans Tonic Water for a refreshing summer drink, or add a couple of teaspoons to a mug of hot chocolate for a winter warmer.

One of a rare breed of liqueurs that improves with age, this particular bottle was distilled in the 1970s, so has around 40 years of bottle age. Over time the colour has faded and it’s halfway between the hues of today’s Green and Yellow liqueurs.

Nose: The colour may have lightened, but the intensity of the nose hasn’t. The sweeter herbs have disappeared and it has taken on earthier notes.

Palate: Incredibly rich – over time, the texture has become more syrupy, and notes of aniseed balls, Lebkuchen and dry mint to the fore.

Finish: Long, rich and minty with an earthy, forest-floor note.

Comment: Stunning balance between acidity, alcohol and flavour. Aged Chartreuse is a thing of real beauty – if you find an old bottle at the back of a cupboard, don’t worry if you think it is past it – give it a try!

One of the ‘newer’ expressions, this was first released in 1838 as a Chartreuse for the mass market – milder, sweeter and lower in alcohol.

Nose: Noticeably less intense than the Green, the herbaceous notes are in the background, with a cough-syrup-like aroma at the front.

Palate: The cough-syrup theme continues, with the higher sugar level noticeable at the tip of the tongue. Sweeter herbal notes of eucalyptus, basil and tarragon are prominent.

Finish: Medium to long, with sweet eucalyptus continuing to the end.

Comment: This has wider appeal than the Green, with the sweeter and mellower nature making it an ideal introduction to the range.

Serving suggestion: Add one part to four parts Champagne (I used Bollinger Special Cuvée) for a tasty alternative to the classic Kir.

Introduced in 2005 to commemorate the 400th anniversary of the receipt of the manuscript, this is intended to be a lower-strength variant of the original Elixir Végétal, staying truer to the 1605 recipe than the Green.

Nose: Not what I was expecting; it has the herbaceousness of the Elixir Végétal, but with the sweeter notes of the Yellow, which mask the pungency.

Comment: Mellow on the nose, this explodes on the palate with a freshness unlike any other liqueur I’ve tried. Despite the high strength, this isn’t apparent on the palate as everything is so well balanced.

Serving suggestion: This is the cleanest Chartreuse for me and doesn’t need anything adding. Eminently drinkable neat, just serve chilled or over crushed ice.

The herbal liqueur category covers an array of flavours, and combining more than one additional ingredient can be tricky to balance, but the Chartreuse range is incredibly well integrated, especially considering that 130 plants are used. Tastes and fashions change, so it is remarkable that the original recipe is still used more than 400 years after it was written. The Carthusian order are silent, so the production knowledge has been passed down the generations without verbal communication, making it an incredible achievement that they have built Chartreuse into a world-renowned brand. They have kept the traditional values while adapting to the market’s needs with the introduction of new products – Génépi, Gentiane and other liqueurs. I enjoy revisiting brands that I haven’t tried in a while, or those which I haven’t enjoyed in the past, and Chartreuse hasn’t disappointed. Santé!

RT @WhiskyExchange: Over on the blog, we shout about the silent world of Chartreuse: http://t.co/EHwqfyC8qC

#Whisky Chartreuse – the elixir of silent life: Chances are you’ve heard of Chartreuse, even if you’ve never t… http://t.co/y8nbVh2rWF

@domu888 Chartreuse – the elixir of silent life: Chances are you’ve heard of Chartreuse, even if you’ve never … http://t.co/khmAnOXG9F

New bit of writing on the work blog, a tasting of five of @chartreuseliq’s finest. http://t.co/6soWFBtRtA