Venue: A secret location in London.

There’s going to be a raucous party this evening – a sort of ‘pre-wake’, if you will (don’t worry, all will become clear).  A fancy Soho joint will be flashmobbed by a shower of whisky subversives, egged on by the delightful Barchick.  A man who looks a lot like the Savoy’s Nathan Merriman (for it is he) will be liberally dispensing his Last Vatted Punch, a tasty concoction featuring a hilarity-inducing amount of Compass Box Spice Tree.

What’s the occasion for this wildhearted revelry? And why will this motley crew of mostly-disreputable agitators leave their salubrious surroundings towards midnight to troop down to the river in the dead of the bollock-freezing November night?

It’s all very cloak and dagger: a subversive ritual is to be ceremonially enacted in defiance of the new order.  Industry sock-puppets The Scotch Whisky Association will be spoken of in unkind terms.  At 11.59 pm, a jerrycan will be produced and two whisky bottles will be filled.  Cheers will ring across the Thames.  Cameras will flash as the ritual is preserved for posterity.  A small piece of history will be made.

Ladies & gentlemen, tonight we will witness the death of Vatted Malt and the birth of the Last Vatted Malt.  We are giving a send-off to a small but significant piece of whisky terminology and toasting the birth of a brilliant whisky.  Collective middle digits will be raised in the direction of a shabby, petty piece of mealy-mouthed legislation.

Allow me to explain.  As Big Ben ticks over to 23rd November 2011 at midnight tonight, it will become illegal to label any Scotch whisky as ‘Vatted Malt’.  This is a result of the deeply flawed Scotch Whisky Regulations being passed into law in 2009 in the wake of  Diageo’s ‘Pure Malt’ Cardhu debacle.  Only bottles which have been labelled before 23rd November 2011 can be sold as ‘vatted malt’ or ‘vatted grain’.

Why has this happened?  The major industry players and the hapless SWA had to save face after the humiliating fiasco and took the opportunity to stitch things up their own way.  Their excuse for getting rid of the Vatted Malt term is the claim that customers found it confusing.  In order to clear things up, in their wisdom they’ve decided that it should be replaced with ‘Blended Malt’, a frighteningly dim and self-defeating conflation of ‘blended whisky’ and ‘single malt’ which has muddied the waters even further.

At a stroke, the government – misguided by the self-serving imbeciles at the SWA – has consigned over a hundred years of whisky tradition to the dustbin like so much private ministerial correspondence. One has to wonder what industry fathers Andrew Usher and Arthur Bell, masters of the art of whisky blending – and whose businesses eventually metamorphosed into Diageo – would make of the hatchet job their corporate descendants have performed on their legacy. 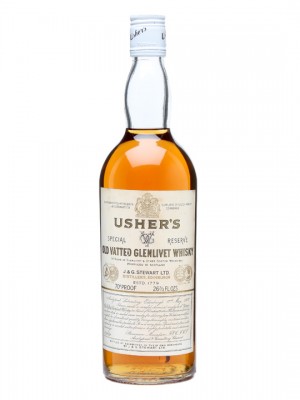 Of course, if you listen to the SWA, ‘blended malt’ could never be confused in consumers’ minds with any other whisky terms such as, er, blended whisky or, um, single malt.  Bear in mind, however, that these are the same geniuses who banned the production of single malt in a Coffey still (a practice with over a century of tradition behind it, and which has recently been used in Japan with spectacular results); who set their lawyers on a South African businessman who wanted to market, um, a London-style gin called London Taxi on the rock-solid grounds that London = UK = whisky – By the way, I’m not making this up – and who wasted untold thousands on an embarrassing legal defeat after nine years of failed attempts to bully a Canadian microdistillery which had the temerity to use the name ‘Glen Breton’ for their Canadian single malt whisky…which was made in a glen…called Glenville…in Cape Breton.  Draw your own conclusions.

However, there are many in the trade who are not prepared to let this pass without comment.  The ‘Blended Malt’ epithet has been roundly condemned by independent voices from across the whisky industry, including Compass Box’s John Glaser, who has written, with his pragmatic head on, a concisely-worded Q&A explaining the new regulations for whisky fans who aren’t quite sure exactly what the hell is going on.  John’s attitude is that, like it or not, we’re all going to have to live with these new rules – so someone had better start educating the consumers to try and minimise the confusion that will inevitably result. He’s very kindly allowed us to reproduce it on The Whisky Exchange for posterity.

But back to this evening’s entertainment.  After some pleasant frivolity in Soho, the two bottles filled from John’s jerrycan at 11.59pm at a secret London location by the Thames will be the last two bottles of whisky that can legally be labelled ‘Vatted’. The labels (of course) are a work of art.  But what’s inside?

The Last Vatted Malt is a joint bottling from Compass Box and The Whisky Exchange.  We’ve wanted to work with John on a joint release for some time and this seemed like the perfect opportunity to produce something really special.  After much experimentation and debate, the final marriage was agreed.  Just 1323 bottles were yielded from the casks used, at a full strength of 53.7%.

The press release for the Last Vatted Malt coyly refers to 22% of the liquid being from a 1974 sherry butt from ‘the younger of the two distilleries in the village of Aberlour’, while the remaining 78% is from a small batch of 1984 hogsheads from ‘the famed distillery in the village of Port Askaig on Islay’.  Peat & sherry, eh? Good combo.  And as a bottling of such historic significance, coming from a vatter of John Glaser’s calibre, you’d better believe it’s pretty special.

There’s also a Last Vatted Grain, made with four different grain whiskies, ranging from a 1965 Invergordon to a 1997 Cameronbridge.  You’ll have to be really quick if you want one of these, though – just 297 bottles have been released at 46%.

Palate:  Sweet rich caramel leading into sherried sweetness and rich pungent smoke, with the menthol and anis from the nose coming back along with some tasty stewed fruit. Water softens everything down into a sweet and smoky mess, in a good way. Oily, and delightful.

Finish:  Big and smoky, with a touch of Fisherman’s Friends and tinned fish, and buttered toast with honey. Sweet and leafy as it fades.

Comment:  A big smoky dram with some elegant sherried flavours hiding behind the peat. A fitting tribute and hopefully a sign of things to come.

Palate:  Full-bodied.  Big sweet hit of sherried fruit (raisins, dried apricots), then a menthol, peaty surge with some mixed peel on the side.  A prominent note of dark chocolate and a healthy dollop of sooty brine.  Damson jam and the bonfire notes from the nose.

Finish:  Big, phenolic and slightly drying in a better-fill-the-glass-up kind of way.  The oak manifests as autumn leaves again at the death.

Comment: Glorious. The tricky union of peat and sherry perfectly accomplished. A fitting epitaph to vatted malt from one of the modern masters of the genre.  This is the best Compass Box whisky I’ve tasted.

By the way, if you fancy joining us in this ultimately-futile-but-great-fun protest gesture, the venue for tonight’s last vatting has now been revealed on Compass Box’s Facebook page…

i hate the SWA. they are an old fashioned, badly concealed cartel working for diageo. they are ruining the industry they are supposed to be protecting. their worst action was when john used slightly different wood for his casks a few years back, thus improving the whisky, but they still banned it.

im not going to stand for it. im working on a plan to get rid of them, or at the very least around their laws.

[…] the use of the word ‘vatted’ on whisky labels came in to effect, complete with a party by the Thames and John Glaser slamming the corks home on a pair of bottles just as Big Ben struck midnight on the […]