This week we welcome back TWE Vinopolis’s Duncan Ross to tell us about one of our recent tasting events. Take it away Duncan…

As you travel north from Perth on the winding A9 you will pass through some of the most beautiful scenery in Scotland. The quaint town of Pitlochry and the unmissable sight of the Dalwhinnie distillery catch your eye, then you’re on to Scotland’s ski capital Aviemore and eventually Inverness.  If you have a keen eye and have been looking at the signposts you may glimpse the one that points you into the forest to the village of Tomatin, pronounced Tomaaartin (Happy International Talk Like a Pirate Day!) and its hidden distillery.

You might be confused as to its location, but with the water flowing over the peat-laden hills from the Alt-na-Frith burn the village is a perfect site for distillation and has been used for this purpose by both illicit and legal distillation for a good two centuries.

The Tomatin distillery was established in 1897 and was built on a vast scale to supply whisky for the many blends of the  booming whisky market.  Its main clients were Johnnie Walker, Chivas, J&B and the seldom seen Big T.  It was silent during the wars but afterwards its production rate grew and grew until by 1974 it was the largest malt distillery in Scotland with an amazing annual production figure of 30 million litres, a figure that dwarfs many major sites today.

However this could not last and by 1984 the company had gone into liquidation and closed down may of its stills.  This closure did not last long and Japanese company Takara Shuzo bought the distillery 2 years later and resumed production, although at a much reduced level.  Today the distillery produces around 2.5 million litres per year, of which about 75% is used in blended whisky. 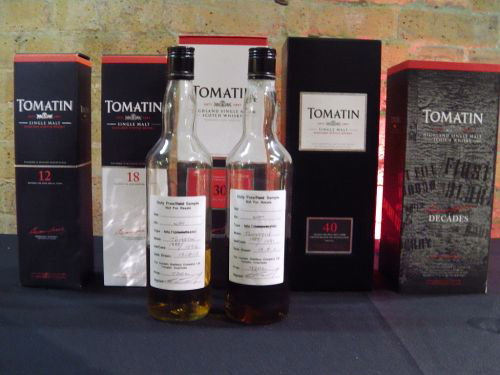 So onto the evening. Our guest presenter for the night was former distillery manager Douglas Campbell, who with 50 years of experience at Tomatin was well qualified to host the evening, presenting a diverse selection of single malts from their current range.  Tomatin have not really been a strong marketing force in the past but in recent years we have seen changes in packaging and a good spread of single malts appearing in their revamped range.  The evening was also going to be a special occasion in that we were going to ask our audience to select from two anonymous cask samples with an eye to a future TWE bottling.

The selection of whiskies covered from the late 1960’s to today’s entry level 12 year old, and it was with the 12 year old that we began the tasting:

The 12yo is matured in first fill bourbon barrels, refill American oak and Spanish Sherry Butts, and is married in sherry butts prior to bottling.

The next whisky was the 18yo. It has a bit more sherry influence and is a good sample of what good but not overpowering sherry casks can do.

This is first filled into refill American oak but spends 2.5 years in Oloroso sherry butts before it is bottled.  This is non-chill filtered and at 46% alcohol the flavours tantalise the tastebuds.

By now we were getting an understanding of what this whisky’s direction is and with the growing demand for aged malt Tomatin has changed with the times – we took another leap and moved onto the stunning 30yo.

Wow!  That was a surprise – a delicate sherry cask finish similar to the 18yo but with some hidden complexities that showed with time. Let it breathe and it swells with flavour.

It was now that the audience started to get more active and Douglas was assailed with the sort of questions that most of our hosts have to endure, but having half a century of knowledge the quietly stoic Mr Campbell dealt with the queries with admirable grace.

We were now entering the second half of the evening and going into areas seldom visited. We had the 40yo next for our palates to savour.

This was something special, reminding me of an old grain or a fine cognac, a big change from the previous samples.  It was a bit of a jolt to the system after the mellower younger examples.  A malt for the connoisseur.

The fifth sample was of special significance to Douglas as its creation is spread across almost his entire career – the Tomatin Decades.  This whisky is a selection of malts from 1967, 1976, 1984, 1990 and 2005 that Douglas has married together to produce a fascinating amalgam of Tomatin over 40 years of production.  The cask combination is also stunning.  Are you ready?  A first fill sherry, an undisclosed hoggie, a refill bourbon, a first fill bourbon and a peated first fill bourbon (At about 15ppm).  This combination is so well integrated that it is a true reflection on the craftsmanship Douglas has imparted in this malt. 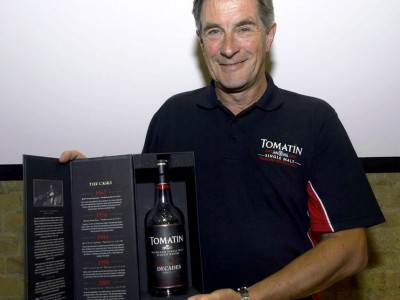 The influence of a small amount of peat, which they have been using in a small number of batches of spirit since 2005, added yet another dimension to what is a very versatile whisky. 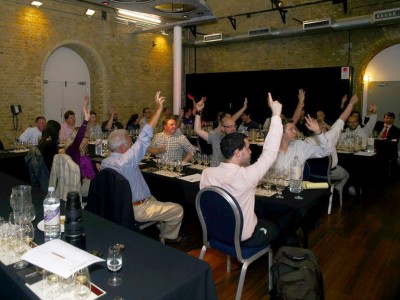 It was now the time of the evening to choose one of the cask samples that had been drawn from undisclosed casks the previous week.  With a bit of initial confusion over which was which, we eventually decided to call them ‘The Light One” and ‘The Dark One”.  These were both taken from 1988 vintage casks and we had no idea as to the cask type or the level of alcohol so it was a stab in the dark as to how they would be received.

Each of these samples had their own virtues and were both quite excellent, but we had to make a choice and it was not really surprising that the ‘Dark One’ took it almost unanimously. However I do know of a few people who vatted them together to get something that was altogether interesting.

A big thankyou to our host Douglas Campbell, whose gentle tones steered us through a diverse selection of one of Scotland’s least known distilleries and hopefully awakened a sleeping giant that has been slumbering in the dark depths of the Monadliath mountains.

[…] Certainly, the recent figures are impressive, with Ingvar Ronde’s Malt Whisky Yearbook quoting 2011′s sales as up by 36%. In the same year, Tomatin Decades was released: a celebration of former distillery manager Douglas Campbell’s 50 years at the distillery, an amazing feat which strongly suggests that the distillery’s owners are sensitive to the heritage of their brand. Indeed, the great man himself visited TWE Vinopolis at the end of 2011 to give a memorable tasting launching the Decades bottling, which you can read all about here. […] 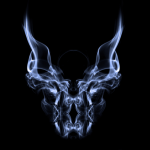