One for the Road: Port Ellen Signatory Tasting Notes

5 Comments on One for the Road: Port Ellen Signatory Tasting Notes

It’s getting late on Friday, and suddenly three more samples are sitting on my desk.  Nothing new there, but these are from Signatory – I think this is the first time I’ve seen a sample from them.

My main feelings for Signatory are largely warm and fuzzy thanks to a jaw-droppping quartet of cask strength Benriach 1975s that they showcased at Whisky Live in 2005.  I wasn’t a massive fan of cask strength whiskies at the time, but those bottlings…wow. (Some of you will have had them, I’m sure.  We still get asked about them, five years later). 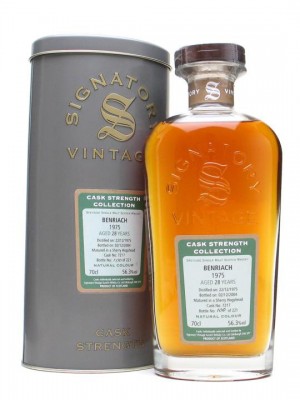 One of the ridiculously great Signatory Benriachs - long gone, sadly

At the time, Benriach had recently changed hands and their stunning revival was only in its infancy, so the only bottling that I’d tried was the execrable old 10yo – an insult to whisky that Seagram had put out during their long and lamentable mismanagement of the distillery. The balls-out awesomeness of Signatory’s cask-strength versions lifted the scales of ignorant prejudice from my eyes.   Here was a Benriach, a cask strength whisky from a distillery I had formerly sneered at on the strength of one pisspoor official bottling – and it was one of the best whiskies I’d ever tried.  At a stroke I was awakened to the possibilities of full-strength whisky, and I also learned a valuable lesson: Never judge a distillery by its standard bottling.  All distilleries can make good spirit if the right people are pushing the buttons, but a lack of care, or plain and simple neglect of a brand can ruin all their good work in a trice.

It’s curious, then, that since that time I’ve only tried a handful of other bottlings from Signatory.  This has not been deliberate on my part, and the ones that I’ve had have been excellent – I recall a sherried Clynelish, a teenage Laphroaig, a long-aged Glen Albyn and a peated Bunnahabhain as being particularly enjoyable.

It’s probably more to do with a combination of factors including my own lack of speed off the blocks, the tendency of their more desirable bottlings to fly out like the proverbial off a garden implement, and the packaging, which I’m not as vehemently against as some, but which does occasionally tend toward the lurid (in the case of the Edradours) or unwieldy (the Cask Strength decanter looks good with its macho heavy base, but it can be awkward to pour with one hand and the fat lip of the decanter can lead to spillage if not carefully administered).  Also, probably because they seem to sell stuff so quickly, they don’t really need to send out samples.  So to suddenly find myself in possession of a trio of Signatory minis is an unexpected, but most welcome, surprise.

I’ve not got much time, so these notes will be short, but my eye is drawn to a slightly curious bottling, so let’s just get stuck into it straight away and see what we make of it.

We’ve had one of these on sale already here, this must be a sister cask at 55.7% rather than 54.7%.  Anyone who cares to speculate on what exactly a wine-treated butt is, please do so in the comments. 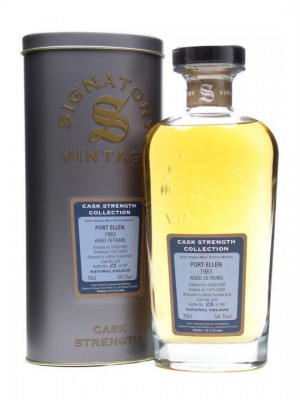 This is the one we've got, not the one I'm tasting.

Colour:  I’m going to say that this is xanthic on the Colour-Me-Goodd scale.

Nose:  Very fresh and lively, youthful even.  Not showing its age at all.  Citrus and freshly-ironed sheets, faint coal, burning driftwood on a beach.  Over-ripe grapefruit, then hints of tweed as the oak makes a belated appearance.  A pleasant manly cologne, would be quite happy to wear this out if I wasn’t going to drink it.  At the risk of sounding like a pretentious w***er (a risk I battle on a daily basis), for me this evokes evening time in expensive hotel lounges, which is obviously a good thing (unless you’re paying, of course).  Not particularly winey, though.  I’d never have picked it as having anything more to do with wine than your standard third or fourth fill sherry cask.  After ten minutes, a faint trace of swimming pools appears momentarily, but then it’s away, leaving more pronounced honey and BBQ aromas.  Some camphor and bandage notes much later.  This is all over the shop in a good way. In a word? Intriguing.

Palate:  More savoury and maritime than the tail of the nose would suggest.  Big coal and pepper attack, then something like chargrilled meat from the afore-mentioned BBQ.  Wow.  This is much more visceral than the nose suggested.  No sign of the fruit on first tasting, but a big medicinal hit that again was only hinted at on the nose.  Let’s have another look.  Tweedy initially on second tasting, seaspray, more noticeable oak influence, and now the pepper and soot just pitches up in the centre of the palate and refuses to budge.  Still very little sign of the fruit or sweetness suggested on the nose.  This is a bit of a monster.  I like it.  In a word? Startling.

Finish:  Pretty big.  Medicinal notes, as mentioned above, struggling to compete with a fairly brutal spicy heat at full strength.  After a few sips when it beds down on your tastebuds and you’ve acclimatised to the initial phenolic blast , some sweetness slowly starts to appear in the finish, (think barley sugar) but it’s through a big morass of top-end fiery stuff, so you have to work pretty hard to find it. In a word? Big-Boned. (Note to pedants: they’re hyphenated, so that counts as one word.  My blog, my rules).

With water:  As a card-carrying whisky masochist, adding water is usually an after-thought for me, but in some cases it seems a sensible option, and this definitely ticks that box.    Then again…I’m reluctant in case it falls apart, I’m really enjoying this at cask strength. Maybe just a drop…

Okay, a drop of water has definitely mellowed the nose, some more obvious wood notes (polish, furniture wax etc).  For the first time I get something possibly akin to a wine nose – and it’s probably just the power of suggestion, but perhaps there is a hint of oxidised white wine, maybe dry amontillado.  The swimming pool notes are also back, again mercifully briefly.

The palate is actually pretty good with water (I’ve taken it down to maybe 45-48%), with some of the same old oilskin, tarpaulin notes as one sometimes finds on old Highland drams.  I’m presuming this is from the oak – let’s not forget that this is a 26yo whisky we’re talking about here, and spirit that has survived a long time in second or third fill casks often has this character (which I really like).  There’s still enough coal and sea-spray to keep me happy, and the sweeter notes are definitely lifted a bit too.  The finish first tingles the tip of the tongue as if a large grain of cracked black pepper was sitting on it, then finally becomes briny, as if a drop of seawater had replaced the pepper.  I’m impressed.  Overall, though, I think I still prefer the gut-punch of the full strength.  I’d probably better just pour another little drop to make sure, though. In a phrase? Still pretty hefty.

Comment: Wine-treated or whatever, this is a muscular PE.  If it was re-racked into a wine cask to take the edge off Lord knows what it must have been like before.  As I said, we have a sister cask of this that would probably have sold out long ago if it didn’t say ‘Wine-treated Butt’ on the label (I’m guessing that people are thinking of wine finishes and deciding it’s not for them).  If I had to guess I might wonder if it was a knackered fourth fill sherry cask that got a bit of a rubbing over with some fino in between fills.  Either way, it’s preserved some pretty overtly phenolic spirit very well (some spirit is good enough that it doesn’t seem to need too much from a cask and can therefore stay perky for decades in tired wood), and if I had the type of budget to drop that sort of money (£150) on a bottle of whisky this would be right up there on my list.  Would love to try the one we’ve got alongside this for a head to head.

Right, it’s after 7pm, and I’m late for a party, so that’s your lot.  Please do let me know what you think in the comments section, and don’t forget to have a nice weekend.  Thanks again to everyone who had a go at the bourbon-naming as well – more news on that as soon as I get it.
Slainte!,
Tim

Good point, MossBass – I think I wrote that they were going to be short as a way of convincing myself that they needed to be short because I was running late. Sadly it didn’t work.

afaik wine treated means a cask which has not held wine before is filled with wine or sherry for some time to infuse these aromas into the wood.

Sometimes old casks which have been used several times were wine treated.

If you think of the costs for a sherry barrel these days you can imagine why it is done.

In years gone by casks were treated with paxarette, a kind of sherry paste to condition them.

Some officinados say that the colour of highly praised “first fill sherry” bottlings are due to paxarette.

It is no longer allowed to use it afaik.