We were privileged to have Cooley distillery’s Noel Sweeney conduct a St. Patrick’s Day tasting for us at The Whisky Exchange in Vinopolis, showing off a range of their fine products.

We started off with three examples of the new spirit from the recently-revived Kilbeggan distillery, which began distilling operations again in March 2007, meaning that the first of the new spirit has just reached the three years it requires to be called proper whiskey. 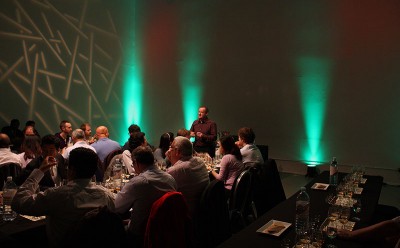 Some rather Celtic lighting at the Cooley tasting

All the whiskey distilled at Kilbeggan has already been distilled once at Cooley, as the stills at Kilbeggan aren’t big enough to take a full-size batch of wash, which needs to be distilled fresh.  Cooley’s low wines are therefore tankered over to Kilbeggan from Dundalk for a second distillation.  The three samples we tried were aged one month, one year and two years respectively.

This is where things get slightly complicated. The 1yo and 2yo have been distilled once at Cooley and once at Kilbeggan in the latter’s reconditioned still from Tullamore – dating from the late 19th century, this 2000-litre capacity still is believed to be one of the oldest working stills in existence.  The month-old new make spirit we tried first, however, is triple-distilled, as Kilbeggan now have two stills of their own, with the newer still a larger replica (3000 litres) of the Tullamore still. 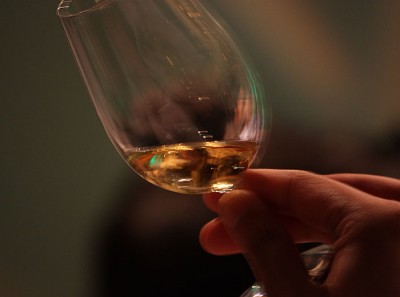 A close-up of some kind of Irish Malt Spirit

There is a difference between richness of texture/weight and richness of flavour in whisk(e)y and it’s often overlooked as they normally go together.  However, as with the finest dessert wines, a light or medium-bodied whisk(e)y can really pack a flavour punch – and in the best examples it could even be seen as preferable to a full-bodied dram, since your tastebuds don’t get weary as quickly. 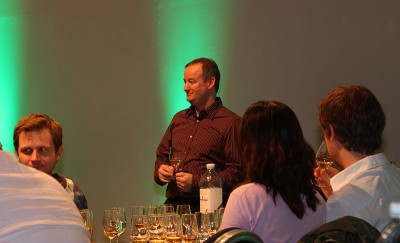 We look forward to following the progress of Kilbeggan whiskey with interest and anticipation.  There should be a 3yo double-distilled Kilbeggan malt released in the next few months.  It’s been aged in quarter casks to speed up its maturation, so it should more developed than the age suggests.  You’ll have to wait a bit longer to see any triple-distilled Kilbeggan though, but on tonight’s evidence it should be worth the wait.

The rest of the tasting was another confirmation of the quality of Cooley’s whiskey – two Tyrconnells and the Locke’s 8yo were extremely drinkable, and I can report that the current batch of Greenore 8yo is the best I’ve tried.   Noel provided a couple of little snippets for the geeks on this one – did you know that: 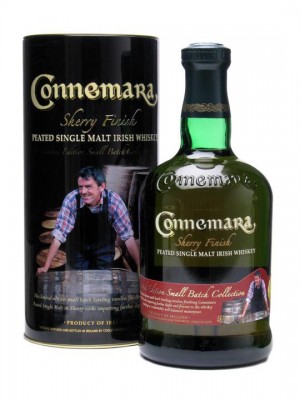 The overall winner on the night: Connemara Sherry Finish

The crowd’s favourite whiskey of the evening, though, was the most recent addition to the Connemara stable – the Connemara (Oloroso) Sherry Finish.

Palate:  Some pleasant, dusty oak initially, followed quickly by the sweet notes from the nose.  Develops nuttiness – sugared almonds, possibly some walnut.  Also light molasses, and then a turn into coffee flavours – mocha chocolate, milky cappuccino.  The phenols are fairly restrained, lurking in the background as light smoke.

Finish:  Medium-length, quite warming, astringent.  Dry wood, leaves, some bonfire smoke and a resurgence of the briny seaweed from the nose.

Many thanks to Noel Sweeney and his colleagues at Cooley for visiting us and showing their range off on a special St. Patrick’s night.  We’ll be sticking a gallery of photos from the night up shortly with the usual unfunny captions (my speciality).

Good to see the Irish getting into the act.
It was left too long to the Scots and the Americans.
I haven’t had the new, I always have a bottle of Greenore on the shelf.
But it’s new to me that they have malt in it. Supposed to be Single Grain, ain’t it?

It is still a single grain in that it is grain whiskey (ie not malt or blended whisky) from a single distillery (rather than a mix of malt and grain whiskey, in which case it swould be a blend). Grain whiskey needs some malted barley in the mash to help kick off fermentation I believe.

To help kick off conversion of starch into fermentable sugars, yes. Fermentation, not really. Yeast cells happily divulge (certain) sugars, but they care not too much whether or not it has its origins from malted barley, wheat or maize or other cereals. Thus, any whisk(e)y with any other grain in it than malted barley, will be a grain whisk(e)y – regardless whether it is distilled in column or pot stills.

Cheers – looking forward to try the Kilbeggan at some point / Pär

They have some great stuff at Cooley. I’m not a massive fan of the sherry finish one. They did a sherry cask bottling for a shop in Dublin that was as good a whiskey as I’ve had. And they also bottled a Tyrconnell 17 that was superb. 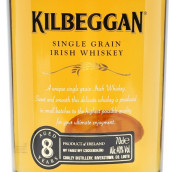