A week or two ago I was writing the text for our shiny (and, of course, fascinating) new TWE Guide to Vodka, and while trying to explain the process of continuous distillation I went into too much detail and wrote far too much text.  This is a common problem I have – due to a perfectionist tendency inherited from my father (who spent five years writing and over fifteen years rewriting and editing a 900-page magnum opus), everything you see on TWE (and particularly on this blog) is relentlessly edited and rewritten until it sounds right in my head when I read it.

“And it’s still rubbish!”, I hear you cry.  But rewriting is a noble tendency with a rich tradition, and occasionally the cuttings therefrom find their home elsewhere. 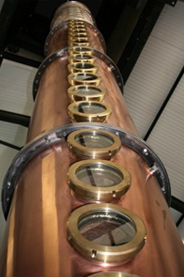 And so it was with my continuous distillation text.  I spent too long getting it right in my head not to use it somewhere.  And as I’m writing this post to plug the shiny new vodka feature I mentioned at the top (visit here, and learn more about this much-maligned spirit), it’s common sense that the natural place for my continuous distillation spiel was here on TWE Blog, which of course is mostly read by people who won’t complain about having to read a few hundred words on the process of continuous distillation, given that it’s the most elegant of the industrial processes used to create our favourite spirit, whisky.

Of course, continuous distillation is so efficient that it’s used for most spirits nowadays, including the majority of rums, brandies and tequilas and just about all vodkas and gins.  Those of us who spend too much time thinking about single malt whisky sometimes forget that very few spirits are actually pot-distilled these days.  But really, that’s a big part of what makes single malt so special.

So, if all these spirits are made in the same super-efficient way, why don’t they taste the same? There’s a number of factors that influence flavour, the main one for whisky, of course, being the casks used.  In continuous distillation terms, however, it’s all about two big factors: the raw material and the strength to which the spirit is distilled.  As we are so often reminded when discussing single malt, it’s the impurities in a spirit that give us the flavour.  It follows, therefore, that a very pure spirit will have less flavour.  But what is often overlooked is how small a percentage of congeners our spirit needs to actually have a flavour.

Vodka is a great example of this. In the USA, neutral spirit is defined as being 95% alcohol or above.  In fact, it’s quite difficult to get any spirit much above this percentage.  Once a spirit reaches 95.6%, it becomes an azeotrope, which basically means that you could distil it again and the proportions of alcohol and water would not change – the proportions in the boiling vapours would be the same as in the unboiled liquid.

Most vodkas are made in one of two ways, the first of which is to get your neutral spirit and apply some proprietary filtration method (quartz sand, Herkimer diamonds etc) and then dilute to standard strength.  This gets you the ‘flavourless’ spirit required by US law, and almost all US vodkas are made by this method.

The other way of making vodka is to distil your spirit to a slightly lower strength and then dilute and bottle with only minor filtration, leaving in some congeners that give a light flavour to your vodka.  This is the way of many of the traditional European vodka-producing countries.

For the grain whisky component that makes up the vast majority of most blended Scotch whiskies (which themselves make up the vast majority of all whiskies sold), the maximum permitted distillation strength is 94.6% – really not very different at all to neutral spirits.  And yet that fraction of a percentage of congeners can contain quite a large amount of flavour. Not as much as single malt, of course, which is generally distilled to just under 70% if it’s double-distilled.  Auchentoshan, being triple-distilled, comes off the still at more like 80%, and Bruichladdich famously pot-distilled their X4 four times, which took it up to 92%, before chickening out in the face of a few hysterical press articles and reducing it down before bottling.

But let’s get back to continuous distillation.  Here’s how it’s done.

Firstly, any sugar-rich liquid, most commonly from molasses, potatoes or grains such as wheat, rye or corn, is fermented to convert the sugars into alcohol.  This lightly alcoholic wash is then passed down through a coiled pipe inside one column of horizontal metal plates which are perforated with lots of small holes (known as the rectifier), where it is warmed by hot vapour coming from the bottom of the column.

In the rectifier, the vapours from the analyser rise through more plates and meet the copper pipes containing the wash heading for the analyser.  In an elegant exchange when the vapours meet the curled pipes of wash, the vapours warm the wash in the pipes and are themselves cooled by the pipes, so that the volatile spirit condenses briefly on each plate, before vapourising again and rising up onto the next plate.

The heavier oils and congeners stripped from the wash by the initial distillation in the analyser are not volatile enough to reach the upper plates of the rectifier.  They drop to the bottom of the column, where they are drawn off and pumped back into the analyser with the wash. 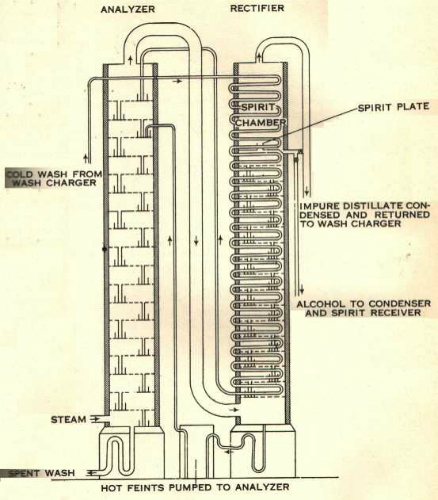 In this way only very alcohol-rich vapour can reach the top half of the rectifier.  Each plate in the rectifier is like a mini distillation chamber, with the alcoholic percentage of the liquid / vapour mix increasing as it gets further up the column. Depending on which plate the spirit is drawn off from, alcohol produced in this way can be rectified up to a strength of around 96.4% – which is your azeotropic pure alcohol.  Harmful high alcohols are drawn off at the very top of the rectifier, where only they can reach, and are condensed and recycled into the analyser.  Just below this point the ‘good’ alcoholic vapour is drawn off, condensed and sent to the spirit receivers.

If you’re making grain whisky, at this point you would dilute your spirit, then fill it into the casks and let them work their magic.  But that’s a story for another day. For vodka, you just dilute your spirit and bottle it, though you may want to do some fancy filtration first if you’re going for the neutral style.

#Whisky Vodka and Grain Whisky: Continuous Distillation: A week or two ago I was writing the text for our shin… http://t.co/dTzvtQZyys

[…] the tallest all-copper rectifier in Europe, to produce a spirit at about 96%. As Tim pointed out in an earlier post, this is about as close to neat alcohol as you can […]

[…] latest of our TWE super-features (following on from our great Vodka exploration and follow-up on continuous distillation a couple of months ago), I’ve spent some time discovering the rich history of mezcal, […]

[…] suggests for weeks at a time – if you want to dig into how they work in more detail, head on over to our post all about them from last […]

Very informative article! I have a question relating to Jameson. How would you triple distill in a continuous process? On the standard expression they say both the Pot Still and Grain whisky has been distilled 3 times? Thanks Neil

We’re not entirely sure – not only does it not make sense to pass distillate through a column several times, the continuous nature of the process makes the idea a bit meaningless. I’ll ping a message to someone at Jameson and see what they say…

The folks at Irish Distillers got back to us: they use a three column setup for their grain distillation (Beer, Extractive Distillation and Extractive Distillation Rectification columns) which works in a different way to the triple pot distillation that they use for their malt whiskey – the Beer column produces a highly alcoholic spirit (~70 % ABV), whereas the ED column collects a much lower ABV liquid (~23%), discarding the higher alcohols that they don’t want in the whiskey. The final column then pulls things back up to 94% ABV.

You can find more details over on the Diffords Guide website – they have a fairly in-depth account of how things work at Midleton:
http://www.diffordsguide.com/producers/29/midleton-distillery