Ever since Waterford first spun up its mill and stepped into the world of distilling in 2017, it’s been disruptive; doing something different and challenging both the whisky industry and consumers. But now, after three years of talking a good game, the distillery team has finally released their first whiskies. How do they stand up to the rest of the whisk(e)y world, what do they taste like, and do they answer the question at the heart of the distillery: does terroir matter?

In the beginning, was Bruichladdich

Waterford founder Mark Reynier has been in the drinks industry for a long time: 40 years. He’s had an interesting career, divided in two by the year 2000 – the year where he led a group to purchase Bruichladdich. In the beginning, he was a wine man, focused on regionality, the vineyards and even the soil that the grapes were grown in.

He brought that same focus to the distillery and, before Bruichladdich was sold in 2012, the distillery team had started experimenting with different barleys. Not so much the different varieties of barley – a task that distillers do every year to see which will yield the most spirit and work best for their processes – but barley from different farms, an investigation into how terroir affects the grain and the spirit it makes. With Bruichladdich sold, Reynier’s focus intensified, and a few years later Waterford appeared on the scene.

A note on terroir 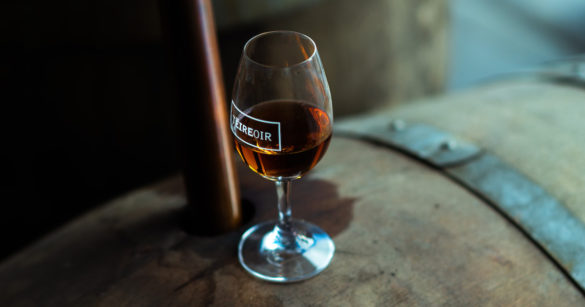 Terroir – or Teireoir as Waterford style it – is a divisive term in the whisky world. It’s a French word that simply means ‘region’ or ‘area’, or, if you dive into the agricultural, ‘soil’. In wine, it means a lot more than those simple translations suggest, bringing together all of the factors that make the grapes taste as they do, from soil type, to altitude, slope of vineyard, direction it faces and, depending on how deep you want to go, the attitude of the wine maker to growing. It’s the natural expression of the place where a grape is grown and the flavours that produces.

There are almost constant debates online – and even a famous in-person debate between Mark Reynier and Diageo’s Nick Morgan – as to whether it’s a concept that has any merit in whisky. The process of distillation is much more destructive than wine-making, and there is a strong argument that it can strip out any uniqueness from the barley. Waterford is the rebuttal.

Waterford Distillery – from stout to spirit

Brewing has been going on in the town of Waterford for a long time. From the Strangman’s brewery of the 1790s to the Guinness factory it became in the 1950s, there is a long history of making beer on the site that is now Waterford Distillery. The last, ultra-modern, Guinness plant closed in the early 2010s, but it didn’t sit unused for long: Mark Reynier and his backers bought the site and Waterford Distillery was born in 2014.

Barley – one field at a time 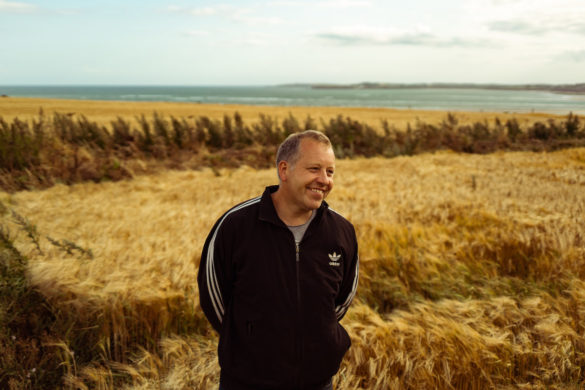 Rather than buying in more generic malt, as most distillers do, Waterford is obsessed with the source of its barley. Each batch is sourced from a single farm and harvest, and is malted and stored separately in The Cathedral, the Waterford barley store.

The Cathedral has 40 bins, allowing the distillery to keep up to 40 batches separately at a time. Each of these is processed on its own, with the whisky-making process tweaked slightly every time to not only keep things fairly consistent between batches, but also to emphasise the flavour of the barley where possible – a bit of time added and subtracted, a tweak to a temperature, a balancing act to try and keep terroir rather than process at the forefront of flavour creation.

Retro-fitting a brewery to be a distillery isn’t as easy as it first seems. We may talk about whisky being distilled beer, but while the processes of making both are similar to a point, the outcomes of those processes are quite different – a beer that should be drinkable soon after brewing, versus a wash that will be distilled and aged.

Waterford was set up to be an incredibly efficient brewer of Guinness and was equipped with two very modern pieces of equipment to help with that aim: a hydromill and a mashfilter.

The first is unique, as far as I know, in the whisky world and works very differently to the more traditional mills seen across Scotland and Ireland. Rather than crushing dry grain between two closely set rollers, Waterford’s hydromill presses wet grain through a finely perforated plate. While the traditional mill creates a mix of different-sized particles – the famed husks, flour and grist – that are key to extracting the sugars within the grain in a mash-tun, this version creates a consistent and already ‘mashed’ paste.

And the differences don’t stop there.

Traditionally, you mix your milled grain with hot water in a large vessel called a mash tun. Once you’ve extracted your sugars, you filter the liquid somehow to remove the solids. In a lauter tun – the most commonly used type in whisky making – this involves a sieve built into the base of the tun, which is opened to allow the liquid through, husks from the milled grain helping to stop the holes in the filter from getting clogged.

At Waterford, they already have a sort-of mash from their innovative mill. (A monster mash? – Ed) To continue the process, their hydromilled malt is heated to promote gelatinisation of the starch in the grain – the dissolving of starch in water and part of the process of releasing the sugar in the grain so that we can use it to make alcohol – with the temperature varied with each batch of barley to optimise the process.

Next, rather than filtering out the solid grains, Waterford uses a mash filter. These are not common in whisky – Teaninich and Inchdairnie are the only other examples I can think of – but the idea is simple: fill your mash into a series of tea bags, and then squeeze them to extract the liquid. It’s a much more efficient process that pulls out more liquid (and thus dissolved compounds) than you’ll get from a mash tun.

In beer making, using a mash filter is a way of getting maximum sugar out of the barley to increase efficiency – more sugar out means more alcohol per ton of barley in. At Waterford, it’s used to get the most flavour from the barley.

Fermentation and distillation – business as usual

Up until this point things have been a bit unusual, but from the moment the wort hits a washback, we’re firmly back in regular whisky-making territory, albeit at the more exacting end of the spectrum.

Waterford use a standard yeast – the team don’t want to change that variable yet, with an emphasis on ‘yet’ – and while fermentations are long to ensure that both primary yeast fermentation and secondary bacterial fermentations occur to maximise the flavours created, it’s very similar to how other distilleries operate. 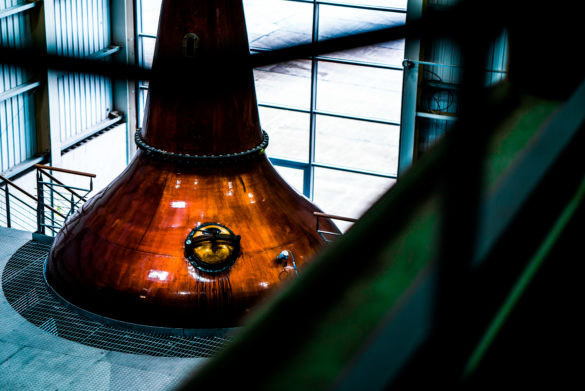 Likewise, distillation is slow, but otherwise standard. The cut points are not fixed, shifting a little from batch to batch to pull out as much barley character as possible.

The resulting spirit is then filled to cask, and the breakdown of cask types used for each batch is as homogenous as the distillery can make it. While the very earliest batches don’t have any American new oak in the mix – the distillery had trouble getting hold of that type of cask at first – they’ve since used the same mix in roughly the same proportions:

This consistency is to ensure that they end up with a very similar selection of whiskies for each farm, allowing comparison between them – essential to the ongoing experiment of how each farm’s terroir will create different flavours.

When every batch you make is deliberately different, coming up with an actual whisky to sell is surprisingly difficult. Drinkers like consistency and being able to buy the same bottle more than once, but that is very much against the philosophy of production at Waterford. Here, it’s Mark Reynier’s wine background that again informs the decision – it’s all about cuvées.

When making wine, producers embrace the challenges each vintage brings, and we expect variation from year to year. Larger producers will pull together wines from many different terroirs to create a blend that both expresses an ongoing flavour profile and still reflects the character of the year. It’s this approach that Waterford hopes to one day use. 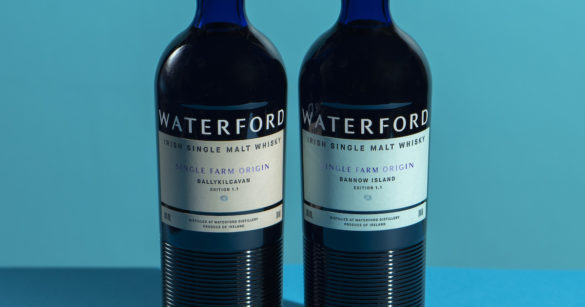 The first releases are single-farm, single-harvest editions – Waterford’s Single Farm Origin range – the elements that will one day be used as components of a cuvée. They give an insight into the way the components will differ and give us a chance to finally see what’s going on at Waterford.

Read more about the first releases: Ballykilcavan and Bannow Island >

Whether you believe in terroir in whisky or not, Waterford are making very interesting whiskies. Down the line, there will be spirit made from organic and biodynamic barleys, as well as well as some using older, heritage grains that are quite different from what is used today.

At the moment, the whiskies are very much aimed at the geeks – the curious, the experimenters, the people who want to dig deep into what makes their whisky what it is. But, further down the line, we will see the other results of the grand experiment – cuvées that amalgamate the best of what the distillery has, focusing on each terroir not solely for its unique characteristics but also what it brings to a blend: a blend that shows off the best of what Waterford can create.

Really interesting. Great article. Thanks for sharing Billy! All the best, Ed