St Patrick’s Day is upon us. I will be hiding in my flat tonight, avoiding streets thronged with green-clad drinkers throwing Guinness at each other as they swap foam shamrock hats and look for the next bar. That’s not what St Patrick’s Day is about for me. There is more to 17 March than beer and whiskey: I also drink Baileys.

Now, before you start judging, let me explain. My first introduction to the ubiquitous Irish cream as a Paddy’s Day tipple was at university, where the hosts of my first St Patrick’s Day party pulled ice cube trays of frozen Baileys from the freezer – we plopped the chunks of frozen liqueur into glasses of liquid Baileys to toast the day. I ended up later eating the remaining frozen Baileys, melted to the consistency of ice cream, from the trays with a tiny spoon, and with that a sneaky fondness for the stuff was embedded in my brain. 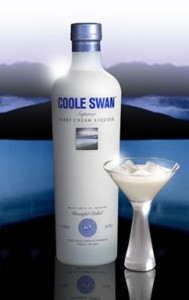 On starting in the whisky industry, I discovered that Baileys was not the only creamy Irish liqueur. While there are now Baileys variants – including orange truffle, coffee and the posh-chocolate-sauce-like Chocolat Luxe – there’s also a whole range of other Irish creams, from perennial favourite Coole Swan to the more rustic varieties. In honour of St Patrick’s Day this year, I decided to go down that rustic route and make my own.

Traditional Irish cream, in the Baileys and Coole Swan style, focuses around four key flavours: whiskey, cream, chocolate and coffee. From that basic concept, it looked fairly easy to make my own, but, from digging around online, there’s more to it than sticking some whiskey, cream, a bar of chocolate and a spoon of instant coffee in a blender – the number of websites listing an Irish cream recipe is quite worrying, as are some of the things that they include.

After some internal reflection as to the importance of double cream being involved, if I wanted eggs (raw or cooked) in the mix, and the effects of adding almond and vanilla extracts, I narrowed down my ingredients and came up with a fairly simple recipe:

Stick all of the ingredients in a blender and blend until combined. Taste and add more of anything to make it more to your taste – make it more intensely flavoured than you would normally drink, as you’ll be drinking it chilled and probably over ice, both factors that will reduce the intensity. Fill sterilised bottles (run them through a dishwasher on hot, or rinse with very hot water, and then dry in an oven at 160°C for 10-15 minutes) with the liqueur and store it in the fridge – it should keep for a month or so. Make sure to shake before pouring – it might separate a bit over time – and serve over ice. 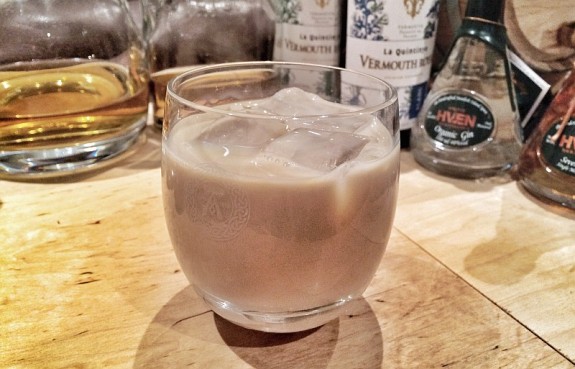 The finished article. And yes, that is an Ardbeg glass…

If you want to try something different, swap the bitters and coffee liqueur for some Patron XO Dark Café – it’s not quite as Irish, but does add some tasty spiciness to the mix.

One word of warning: make sure you put the lid on your blender before pressing go. If you, like me, are the sort of person who forgets such things, we’d recommend that you order a bottle of Coole Swan or Baileys from our website rather than making it yourself…

[…] a shot of Jameson, I try to spend the day looking at another side of Irish drinks. While last year I delved into the world of Irish cream liqueurs, this time I’ve decided to step further back into Ireland’s drinking history and look […]

[…] If you’re looking for an alternative to Baileys, Coole Swan is a richer and creamier version, and this glass set makes a great gift, too. Prefer to make your own? See Billy’s recipe here. […]