Today’s review is of one of the most important, most-revered books about whisky ever written, Whisky by Aeneas Macdonald, which was first published in an edition of 1600 copies by Porpoise Press in 1930.  My copy is the 2006 Canongate facsimile reprint, which is, bafflingly, the first and only UK edition since the original publication.  This oversight is even more ridiculous given that on Amazon this recent reprint now goes for several times the cover price only a few years after coming out – there are even some jokers asking hundreds of pounds for it. 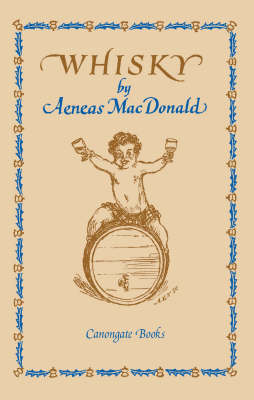 After Charles Maclean’s pithy foreword, Ian Buxton’s introduction is an entertaining hymn to the text.  Buxton is perhaps whisky’s most obsessive, deep-digging scholar and bibliophile and deserves all the credit as the driving force behind the Canongate reprint, which is a very handsomely-presented edition.  He was also, along with Neil Wilson, behind the brilliant but sadly short-lived Classic Expressions reprints of even older texts including Reminiscences of a Gauger, The Manufacture of Whisky and Plain Spirit and Smuggling in the Highlands.

In the introduction, Buxton also gives an account of his extremely impressive solving of the 75 year old literary conundrum of Macdonald’s true identity.  His research revealed that ‘Aeneas Macdonald’ was in real life one of the founders of the Porpoise Press, George Malcolm Thomson.  Thomson was the author of over twenty books during a very long career, and in fact only passed away in 1996, ten years before this reprint was released. 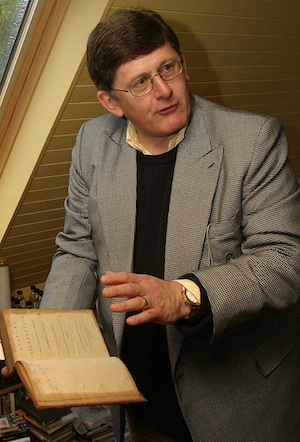 Thomson’s reasons for assuming a pseudonym for Whisky were threefold.  Firstly, as one of the founders of the Porpoise Press, he did not want its reputation to be sullied by accusations of vanity.  Secondly, one of his previous works Caledonia, or the Future of the Scots published two years earlier in 1928, had provoked minor scandal due to its forthright criticisms of aspects of the Scottish psyche and society of the day.  Thomson had recently been referred to as ‘the best-hated man in Scotland’ and he did not want Whisky, which is obviously a deeply-felt work of the heart, to suffer by association.

But the third reason for Thomson’s anonymity was the most pressing and important: his mother was a strict teetotaller and he was determined that she should not find out that her son was glorifying Scotland’s water of life in print.  It was a secret that he was able to keep for three quarters of a century and Buxton deserves great credit for unearthing it a decade after Thomson had taken it to his grave.  Anyone who has met Mr. Buxton will not be surprised at the ferrety tenaciousness with which he disinterred the truth.

After these pleasant hors d’oeuvres, it’s time to plunge headlong into the book.  Plunging is required, as the author begins with a ferociously lyrical attack on the enemies of Scotch.  They fall into two types, both of whom are still familiar today.

First in the line of fire are, erm, those awful types who read a few books and think they know everything:

“These dilettantes of the world of drinking are distinguished by weak stomachs and a plentiful store of snobbery… In finding those qualities of bouquet and body which their textbooks bid them seek, they are infallible, provided the bottle has been correctly labelled.  They will, indeed, discover them before they have tasted the wine… These creatures have the insolence to despise whisky… the absurd and unmanly inner weaknesses of the bookish wine snob [are] concealed from the ridicule they deserve.”

Next up for Thomson’s ire are indiscriminate drinkers who take their whisky with soda and drink only to get drunk:

“With pain and not without a hope that they may yet be saved, let us number their sins… they drink not for the pleasure of drinking nor for any merits of flavour or bouquet… but simply in order to obtain a certain physical effect…. Whisky suffers its worst insults at the hands of the swillers, the drinkers-to-get-drunk who have not organs of taste and smell in them but only gauges of alcoholic content … “

In both cases his words are frighteningly, and depressingly, still pertinent. Thankfully, one of Thomson’s most memorable, and oft-quoted passages is currently out-of-date:

” The notion that we can possibly develop a palate for whisky is guaranteed to produce a smile of derision in any company except that of a few Scottish lairds, farmers, gamekeepers, and bailies, relics of a vanquished age of gold when the vintages of the north had their students and lovers.”

Having dealt with whisky’s detractors and defilers in summary fashion, Thomson bursts suddenly into emotive praise for the noble spirit itself, with a long list of its qualities. In doing so, he distributes a large quantity of some rather piquant putdowns.  The cloak of anonymity had certainly sharpened the dagger of Thomson’s pen.

“The ale-sodden Saxon has a temperamental inability to comprehend the true inner nature of whisky… Sometimes he may have wondered suspiciously… How could the Scots, a disagreeable people cringing under the tyranny of the pulpits, ever have come to think of this liberating and audacious drink?”

Indeed, the entire opening chapter is almost like a stand-up routine, so thoroughly imbued is it with zingers of the highest calibre. Thomson can almost be seen as a forerunner of Billy Connolly [insert sweary words disclaimer here].

“[The Scots] have a deep but erratic strain of frivolity; they have never taken themselves seriously as a nation; their patriotism is of an impatient and sporadic character… they could never conceivably have had the lack of humour which was required to build the British Empire.  The statute books of their old parliaments are full of laws against golf and football, for the Scots preferred these deplorably unwarlike sports to the practice of archery which would have fitted them for battle.”

In the next chapter, the author embarks on a fiercely erudite delve into the history of whisky in written literature and the attitudes of contemporary writers and thinkers towards it.  This remarkable chapter includes a poem written by a Roman Emperor; a discussion of Ferintosh and whisky’s part at Culloden, where it fortified the Bonnie Prince and was used, perhaps for the first time, in the performance of the Last Rites; and the only criticism of Robert Burns’s championing of whisky that this reviewer has ever read.  The latter is a quite staggering denunciation: 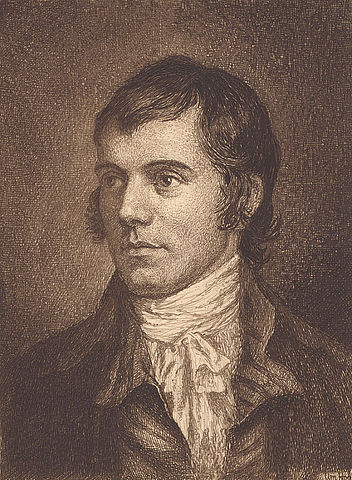 The Bard – possibly a worthless toper (pic from WikiCommons)

” … the poet laureate of whisky had but the slightest acquaintance with a whisky pleasing to civilised palates…his muse, as he calls it, was nothing but the abominable Kilbagie of its day. [Kilbagie was Robert Stein’s industrially-produced, little-aged Lowland rotgut – Ed.] No word of Burns’ gives the slightest impression that he had any interest in the mere bouquet or taste of what he drank; on the contrary, his eloquent praise is lavished on the heating, befuddling effects of whisky… it would be idle to suppose that he had any real appreciation of the merits whisky might have.”

And so it goes on.  Every page of this marvellous book has something quotable, something remarkable (did you know that Ireland had 1,152 licensed distilleries in 1779 and just 124 by 1800?), something merely outrageous, or all of the above.  Every phrase fizzes with a righteous energy as keen as a blade and Thomson’s prose is by turns poetic and polemic, as befits a passionate Jacobite loyalist with a grudge and a good disguise.  Thomson’s targets are not disposed of with a crude Wallacian broadsword, though, but skewered with the cold-eyed precision of a sgian-dubh between the ribs.

Buxton describes Whisky as ‘the first modern book on whisky and… the spiritual chief of all that follow’, which as a summation is pretty tough to improve on, in my view.

As evidenced by the defenestration of Burns, no sacred cow is safe and despite the razorlike precision of its elegant prose, the book’s tone has the feeling of an impassioned harangue in a smoke-filled library or gentlemen’s club.

The text itself is short and its urgency and flow give the impression that it may have been completed quickly. A remarkable amount of Thomson’s writing is still absolutely relevant, though, and could have been blogged yesterday.  From the denunciation of colouring in whisky to the griping about the distillers’ lack of transparency as to the malt/grain proportion or the age of their blends, many of Thomson’s points are still being debated on social media on a daily basis.

In light of this, one finds oneself doubly surprised when coming across one of the book’s very few misconceptions. I found this self-contradictory passage on the process of wood-ageing particularly curious:

“The function of [sherry casks] is often misunderstood.  They do not impart qualities to the whisky which it did not possess before, although the action of a saturated cask may be to conceal, under a strong, imported, winey flavour, some defects in an inferior whisky…”

Other facts are outdated, none more poignantly so than this from the Geography chapter:

“…if the full repertoire of whisky is not to be irremediably impoverished the Campbeltowns must remain… Campbeltown distilling has been somewhat under a cloud in recent years… A few years ago it would have been necessary to mention seventeen Campbeltown distilleries, but in the interval the stills of seven of them have grown cold.”

Having said that, some of Malcolm’s statements are astoundingly apposite for today.  Take for example, the closing salvo against blended whisky from the end of the History chapter.  It certainly gives the lie to some of the more romantic marketing seen in the last thirty years or so during the second coming of whisky.

“The modern history of whisky is so intimately associated with the development of manufacturing processes, with the commercial and financial aspects of what has become almost as much a science as an art and an industry rather than either, that it may be considered more conveniently under separate headings. We leave the story of whisky at a moment when it is exchanging a past illustrious and obscure for a present infinitely more prosaic, conducted in the full glare of modern commercialism and with all the devices at the disposal of a highly capitalized, well-organized, large-scale industry.  Whisky emerges from the shadows of the hermetic arts into the harsh limelight of the age of trusts and cartels and mass-production.  The blue smoke rising warily above the heather dissolves and in its place there rises the gigantic image of one whose monocle, scarlet coat, top boots and curly-brimmed tall hat seem strangely remote from the glens and the clachans.”

It makes the blood run cold to think that these words were written eighty three years ago.  And what on earth would the prophet George Malcolm Thomson make of the whisky industry of today?

#Whisky Classic Book Reviews: Whisky by Aeneas MacDonald: Today’s review is of one of the most important, most… http://t.co/s0CbyMp2g9

Wonderful, wonderful to see this beautiful and poetic little book, so tragically under-rated for so long, reviewed here with such sensitivity and relish. So glad too, to see that you realise that the first chapter is an extended joke against GMT’s English friends; essentially one long tongue-in-the-cheek riff. You have made me very happy!!

@TWEBlog @TimFFS Thanks. So good to see this poetic little gem getting the attention it richly deserves. Thanks!

[…] for the reprinting of one of the books in the aforementioned Classic Book Reviews series – Whisky by Aeneas MacDonald. Ian’s background in whisky marketing, and his more recent consulting and writing work, made […]