January is normally a bit boring for whisky releases. Christmas has been and gone, people are counting pennies and the whisky industry is plotting quietly as the end of the tax year heaves itself over the horizon. However, a few intrepid distillers brave the annual ‘unseasonal’ snow and fling their latest creations into the hands of whisky drinkers. One regular fixture in this sparse line-up is the annual Glenmorangie Private Edition.

Starting out three years ago with Sonnalta, finished in PX casks, and following it up with Finealta, lightly peated and made to a 1903 recipe, and last year’s Artein, matured in ‘super-Tuscan’ Sassicaia wine casks, this year’s entry is another examination of the wood used to mature the whisky. Some trees. In the Ozarks. Not yet made into barrels.

It’s called Ealanta, seemingly the Gaelic for ‘Skilled and Ingenious’, and is a 19 year old whisky, distilled in 1993 and entirely matured in new charred oak casks. This isn’t the first time that Glenmorangie have gone down this path, with their 1991 vintage Missouri Oak release also being matured in their new oak Artisan Casks, made using wood from a patch of trees in the Ozark mountains specially selected and acquired by the company. However, that was released at 11 years old, whereas the new Ealanta has an extra 8 years in unforgiving new oak. Dr Bill Lumsden inherited the casks used for Ealanta when he took over as their whisky maker in the mid-1990s and has been nurturing them ever since, only now deciding to release them.

So, how did the experiment go? 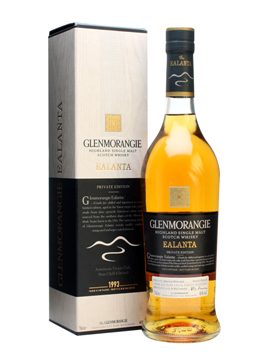 Finish: Vanilla cream and woody spice, especially a lingering cinnamon tingle. There some drying woodiness, but it’s not unpleasant.

Comment: It’s certainly no shrinking violet, with lots of wood as you’d expect. However, it doesn’t go too far, and while the hot and spicy finish may not be for everyone it’s certainly a rather drinkable dram.

Palate: First impression is very nutty and spicy; hazelnuts and brazil nuts; dried bark, pencil shavings. There is some honeyed dark fruit (prune) under here somewhere, but it takes a bit of digging. The oak is very big, but very clean, not musty.

Comment: Remarkably bourbony – just goes to show how much of any bourbon’s character is down to the new oak in which it is matured.  I reckon this is the best Glenmorangie Private Edition since Sonnalta.

I will admit to there being some scepticism amongst the TWE blog team – reception of the Finealta and Artein has been mixed and the prospect of an over-oaked Glenmorangie was a very real possibililty, but Dr Bill rewards those who have faith in him. It may not be one to stick with all night but it is a very drinkable dram which not only goes down well as a single malt but also, we’ve heard from those who attended the launch, works quite well as a substitute for bourbon in a variety of cocktails. Or just in a glass with some ice…

It’s available to buy now over on our website.

[…] companies who’ve been experimenting with new oak recently. Along with limited editions like Glenmorangie’s Ealanta, we’ve also had more easily available bottlings like Benromach’s Organic, now back to […]

[…] of this year’s list is Glenmorangie Ealanta, now sadly sold out. I wrote about it here on the blog when it appeared back in February, and while it wasn’t really to my taste it was an […]

[…] in the 2014 Edition Jim Murray’s Whisky Bible. If you’re looking for a bottle of the Ealanta get over to our site sharpish – we’ve got a few bottles […]

[…] thing that has made Glenmorangie’s approach with the Private Collection so successful – Ealanta is reaping the reward of its Jim Murray Best Whisky in the World nod and Companta, as different a […]

Glenmorangie Tusail – a Maris made in heaven — The Whisky Exchange Whisky Blog says:
9 February 2015 at 1:09 pm

[…] when considering a new Glenmorangie Private Edition release (we’ve already blogged about the Ealanta and the Companta bottlings), Dr Bill says there are three […]