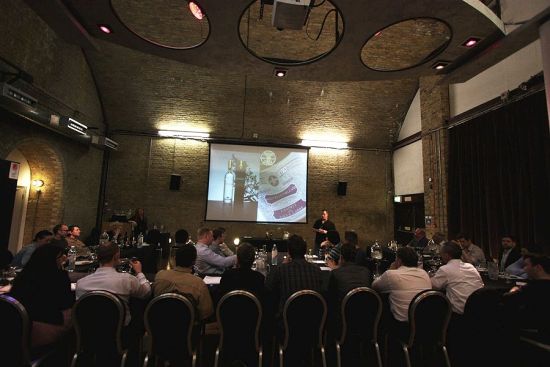 I like absinthe. I’ve outed myself as an absinthe fan in public on a number of occasions, and over the years, slowly but surely, it seems that people are coming around to the idea that absinthe isn’t just for making you fall down faster than yellow fizzy beer. My realisation of the tastiness of absinthe started last year, when I discovered that a few companies were trying to make ‘proper’ absinthe, using whole botanicals and traditional methods to make spirits with depth and complexity, rather than green things to set fire to.

One of the companies that I’ve been a fan of is Jade Liqueurs, overseen by former (or current, depending on your view of absinthe distillation) research chemist Ted Breaux. A few months back we were lucky enough to recently be paid a visit by Ted and Sip or Mix’s Jenny Gardener, who is the chief Jade absinthe slinger in and around the UK. They hosted a masterclass as the last stop on a fairly comprehensive week of running around London spreading the good word of absinthe. Along with the range of Jade absinthes we also tried a blanche absinthe from La Maison Fontaine and some of the other things that Ted has been working on of late. 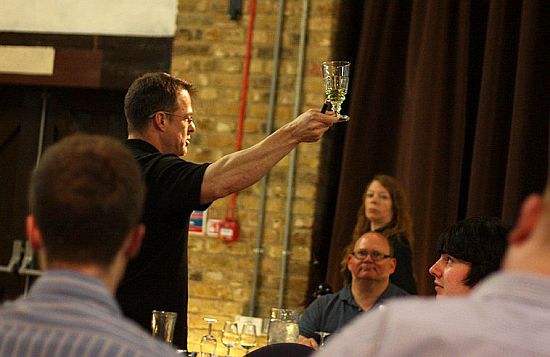 We started with Nouvelle Orleans, an original recipe from Ted based on historical recipes and local flavours from New Orleans, his home town. We were all poured a glass and then directed to the various absinthe fountains and jugs of iced water dotted around the tables – absinthe isn’t really a drink to be sipped neat. It started out as a medicine, designed to be mixed with lots of water, and traditional absinthes are generally designed to be diluted before drinking – a ratio of between 3 and 5 parts water to one part absinthe is fairly usual. 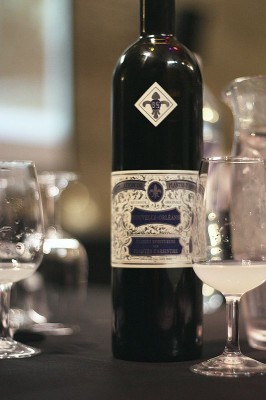 Anyways, back to the Nouvelle Orleans:

Palate: Dominated by sweet aniseed balls with a hint of cream but with some underlying woody bitterness.

Comment: A very approachable absinthe and a great introductory drink – not too challenging at the same time as being interesting.

Ted started out on the path towards building his own absinthe brand back in 2000, when he got three bottles of absinthe from the early 20th century, produced before the various bans on its production popped up around the world. He analysed them for levels of Thujone (the chemical thought to have caused psychological effects in drinkers of absinthe) and various poisons, and found them to be safe – there were no poisons and the Thujone levels were much lower than had been thought, certainly not enough to cause the symptoms ascribed to its presence.

He continued the analysis of the absinthes and worked with a lawyer colleague to get the US ban on absinthe overturned. The process of getting approval for spirits sales in the US is in two parts – liquid and label. First, in 2006, they sent in the liquid for analysis, which was quickly approved. Then they sent in their label, at which point the fun began. After some legal wrangling the authorities came around and in 2007 Lucid Absinthe hit the market, the first traditionally made American absinthe to be produced in almost 100 years.

Ted moved on from Lucid and started working with a French distiller. Using his analyses of old bottles and a bit of experimentation he produced a number of recreations of older recipes, trying to revive the flavour profile of old, pre-ban absinthes. 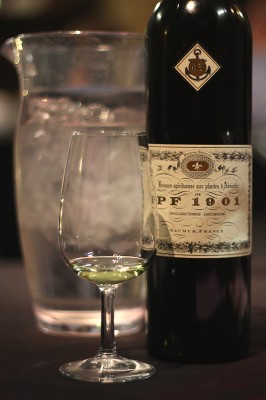 The first of these that we tried was PF1901 (since renamed Jade 1901 for various trademark-related issues). While Ted can’t put the names of the brands they are inspired by on the labels I can reveal that the initials here stood for Pernod Fils, now known for being makers of Pernod Anise (one of the many styles of anis flavoured drinks that became popular after the ban of absinthe) but previously famed as one of the earliest commercial producers of absinthe.

Nose: Dry and herbal, with sour green leaves and an underlying sweetness.

Palate: Floral and soapy to start with a burst of bitterness appearing and leading to a herbal finish.

Comment: Quite different to the Nouvelle Orleans, with a much dryer and more herbal flavour. Quite savoury but still happily drinkable without the addition of sugar.

Next on the mat was VS1898, with the VS standing for Verte Suisse – Green Swiss. Traditionally Swiss absinthes have been blanches: ‘white’ absinthes that are left clear rather than being coloured with herbs after distillation. However, the Swiss have also been making green absinthes for just as long or longer than the French – the history of absinthe starts around the French/Swiss border which was a lot more fluid than it is today back in the mid 1800s (and these days you can wander across without a passport…) 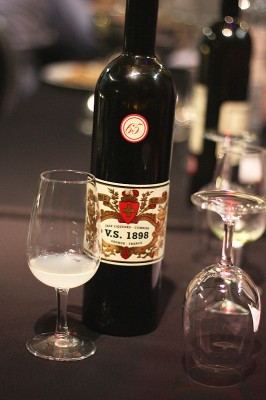 Palate: Mint creams, dry anis and a burst of leafy green herbs on the finish.

Comment: A noticeably minty absinthe, making it suitable for drinking long as a refreshing summer drink.

The fourth member of the Jade absinthe family is my favourite – Esprit Edouard. This one is based on an absinthe of the same name made by Edouard Pernod, a member of one of the spiderleg-like branches of the Pernod family, which was one of the biggest selling absinthes of the early 20th century.

Comment: As stated – my favourite. Balancing the sweetness and bitterness well, bringing in the aniseed ball flavours you often find in sweet absinthes as well as the bitter and leafy herbs of old style digestifs. 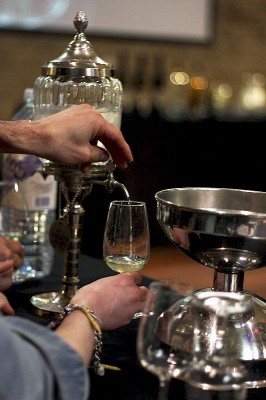 We then tried the blanche absinthe – La Maison Fontaine, produced without the final colouring steps that give the clear distillate its iconic green colouration in verte absinthes. I’ve seen Ted describe this as a Swiss Bleue style absinthe before, but it’s a French blanche, one of the few available on the market.

Comment: One of my favourites – not as sharp as the vertes, losing a lot of the green herb and wormwood edge due to not having the green-producing infusion step, but soft, creamy and spicy instead.

That was it for absinthe for the evening, but Ted also brought along a couple of other treats. First up was his tobacco liqueur – Perique. Over the last few years there has been an increased interest in homemade infusions in bars and one of the flavours that often pops up is tobacco. A smoky tobacco bitters based on high proof rum can be an excellent way to add a punch to dark spirit cocktails, but they’re also potentially full of the nasty bits of tobacco that you don’t particularly want to consume. What would be good is if a guy who knew his way around a chemistry lab did some work on creating a tobacco liqueur that didn’t have all the bad stuff in…

So, Ted has spent the last few years working on producing a safe and tasty tobacco liqueur, ending up with the Perique, which is made using very rare Perique tobacco from Louisiana. There are only 22 acres of Perique being grown these days and it’s generally used very sparingly in tobacco blends due to its strong flavours, a result of the (at least) year-long fermentation in whiskey barrels that makes it ready for use.

Comment: From the description of the tobacco and having tasted some homemade tobacco bitters before I wasn’t expecting this – a light, sweet and floral liqueur that reminded me of drinking tea more than smoking a pipe. However, it does have some smokiness and should add a sweet hit of baccy to your cocktails, although not the punch in the face that some people are looking for.

The Perique should have wrapped up the night, but Ted had something else up his sleeve – a pre-release bottling of some bitters that he’s been working on with cocktail bar legend Dale Degroff, King Cocktail himself. Dale had complained that he couldn’t find an aromatic bitters that did quite what he wanted, so he joined up with Ted to create his own, based on the trio of allspice (aka pimento), star anise and orange peel. Step forward Dale Degroff’s Pimento Aromatic Bitters. They’ve not made it to the UK yet, but we hope to have them soon – they’re very bitter, as you’d expect, with a lot of complex woody flavours, bitter orange and a nice warming spiciness. One to keep an eye out for… 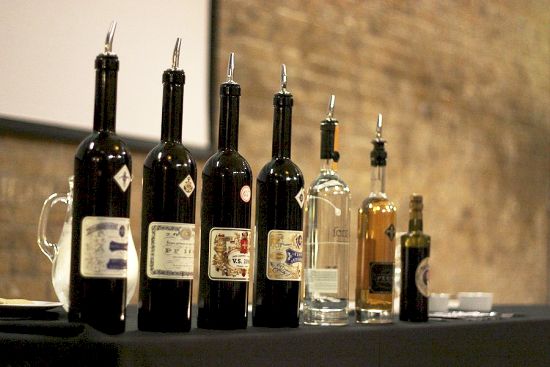 So, many thanks for Ted Breaux and Jenny Gardener for running the evening. We’re working to keep an interesting selection of absinthes in stock at TWE, but if you see some that we don’t have please let us know – we’re always looking for tasty new things to put on our shelves…

There’s also a roundup of the night’s tweets over on Storify.