Despite the Whisky Show taking up much of our time at TWE over the last few months, we still found time to organise our regular tastings down at our Vinopolis shop. One of the perks of my position is blagging my way into these and September was a busy one, with three tastings. There’ll be posts about our Woodford Reserve and Cocchi & Cocktails nights appearing down the line, but to start with here’s some wittering about our one Scotch evening of the month – Glendronach with Alastair Walker. 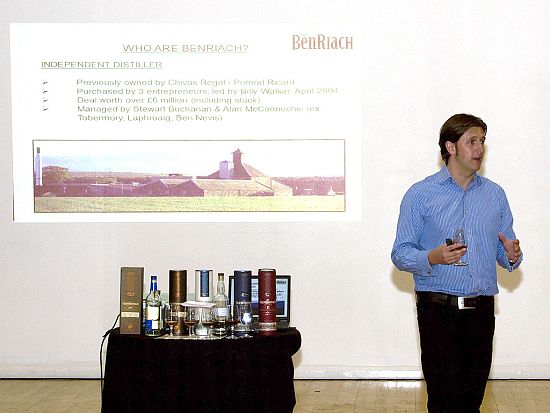 Alastair is the Sales Director of the Benriach distillery, the owners of Glendronach, as well as the son of the increasingly legendary Billy Walker, formerly of Hiram Walker and Inver House, now managing director of the Benriach group. Group is a noun only recently relevant to the company, which started in 2004 with the purchase of Benriach from Pernod Ricard, who had mothballed it in 2002. Billy and a pair of businessmen from South Africa combined forces, raised the cash and paid a reported £6 million for the distillery and a generous amount of maturing whisky stock. They luckily got in about a year before the whisky market started its current expansion, meaning that they got a good deal on the distillery. However their next acquisition was slightly pricier…

In 2008 the Benriach distillery bought Glendronach, again from Pernod Ricard, along with a good chunk of their warehoused stock. However, the market was on the up and the price was more than double what they paid for Benriach. However, with Glendronach having been one of the top four single malts in the past and having a cult following for its sherried whisky it looks to have been well worth the cash, and they’re now pushing forward with expanding the range and bringing the whisky back to its former glory.

As ever they’ve had a few blocks to their immediate plans, starting with the maturing casks that they bought. Glendronach is famous for its sherried spirit, but around 2002, when the distillery was restarted after 6 years of mothballing, the owners started filling into bourbon casks rather than the traditional butts, leaving some stock gaps that have channelled some of the distillery’s bottling choices. However, the new owners have started a program of investment in casks, spending over half a million pounds per year on bringing in sherry butts, and the future has promise of large amounts of sherried whisky.

Alastair does a lot of travel as part of his job as Sales Director, showing off their whisky around the world, and he brought down a few exclusive drams for us to have a try of along with their expanding regular range. 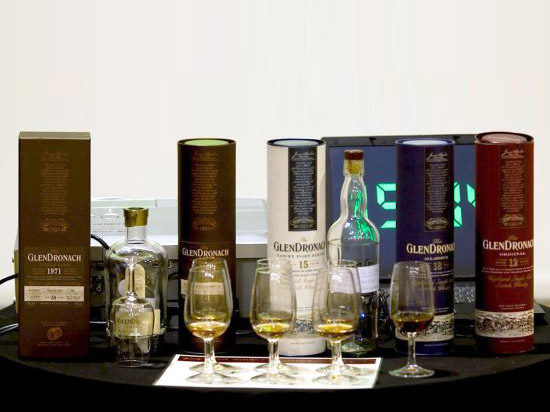 First up was the Glendronach 12 year old, a whisky whose age statement is legally accurate but not entirely truthful. Due to the distillery being closed from 1996 to 2002 they can’t produce a 12 year old, as the stills were silent at the turn of the millenium. As such the 12 year old consists of whisky that is actually at least 15 years old, using the pre-mothballing stock from 1996 at the latest. The whisky is a mixture of spirit matured in Oloroso and PX casks, currently in a split of about 70%/30%, but that won’t last forever – when the 2002 stock starts hitting 12 years old they’ll start incorporating some of that, as they’ve been refilling it into sherry casks since they bought the distillery to give the whisky a nice long finish and bring in the sherry character they are looking for. In short – for old school Glendronach 12 get in now.

Palate: Toffee sweetness, apples, a hint of vanilla and a rich dark fruit background. Water lightens things with more orchard fruit, but without diminishing the richness of the dark fruit hiding underneath.

Comments: A solid sherried whisky sitting at the bottom of their range, but punching above its price.

Next up was the 18 year old, a bottling of 100% oloroso puncheon matured spirit. This is heavily sherried and not every spirit holds up to such treatment. Fortunately Glendronach is designed with this in mind and they take a big spirit cut, giving a heavy new make that has enough of its own flavour that it survives the maturation process and comes out rather well.

Palate: More raisins, eccles cakes, sour plums, cinnamon and all-spice with a big dark woody middle. Water brings out more sweet and sour fruit, with a hint of Worcester sauce, as well as more spice, and simplifies the flavour.

Finish: Sugared almonds + butter, with a bit of grainy wood leading to some grape skin tannins.

Comment: A filthy whisky, and I mean that as high praise.

Next on the mat was a new, soon to be released whisky [which we have just got in and will be appearing on this page on the website soon] – the 21 year old Parliament. It’s named for the colony of rooks that live near the distillery (their collective noun being a Parliament) and is again 100% sherry matured. This varies from the 18 year old by not only being 3 years older, but also by having about a third of the whisky in the mix being matured in PX casks before marrying, the rest coming from oloroso.

Nose: Sticky black liquorice, dark chocolate, stewed raisins, spiced apple and hints of nuts and marzipan. It’s rich and fruitily sweet rather than syrupy, and it sits on the edge of cloying.

Palate: Rich and bitter sweet, with charcoal and raisins, soured PX and hard liquorice sticks. Water lightens the body and brings out some custard, but leaves the charcoal edge.

Comment: This is a BIG whisky, sticky dark and rich. One for the sherry-heads.

Fourth was another new whisky, although this one has just made it into the shops – the 15 year old Tawny Port finish. This was bottled in April 2011 and is a limited batch of 1200 cases, although I suspect that if it’s successful there will be more. This whisky has come out of their experiments with some of the bourbon and refill sherry casks they found in the warehouses, using the spirit in them as a base for finishing. In this case the whisky started in recharred (casks where the inner layer of wood on each stave is planed away and the barrel then recharred, giving a ‘rejuvenated’ cask) puncheons before being finished for about 2 years in port casks.

Finish: Surprisingly dark, with high cocoa chocolate, coffee and a hint of mint.

Comments: A much lighter prospect than the other whiskies tasted so far, with lots of fruit and sweetness.

The fifth whisky for us to try was a world premier – a single cask whisky that was bottled in August and will be available exclusively in the UK soon [and will be on this page on the website, once we have it in stock], a 1995 vintage whisky from cask #4681 limited to just 723 bottles. This one was upping the stakes from the Parliament, as while it’s a few years younger it was matured solely in PX puncheons…

Comments: A big sticky dessert of a whisky – appropriately it’s the PX of the range, thick sweet and dark. I didn’t add any water as it really didn’t need it, easy drinking and delicious.

The penultimate dram of the evening was the 31 year old ‘Grandeur’. This is a development of the old pre-sale 30 year old, which was good although bottled at 40% with added caramel for colour. So, the new owners decided to bottle it at cask strength, with no added colouring, and make it up of spirit matured in sherry butts and puncheons to produce a whisky that would be the core of their premium range.

Finish: Sugared butter tending to tannic wood with a hint of tobacco.

Comment: The obvious king of the range. I just hope they have enough old stock to keep this one going.

The last whisky of the night was one of their old releases, a 1971 vintage single cask (#483) that was part of their first tranche of single cask bottlings, a release that has now become an annual event. This one is very sold out and Alastair dug one out of the archives to give us a bit of a treat to end the evening – they sell whisky by the case and every now and again there’s a spare bottle that doesn’t fit into a box of 6…this was one of those. The whisky was matured in an oloroso butt and bottled at 38 years old, maturing from February 25th 1971 until July 2009.

Comments: A belter. A fantastic whisky to end almost any evening on, balancing the rich sweetness with bitter wood and coffee to make an excellent digestif.

With their latest single cask release already in the shops and the next already being touted as containing some impressive things (including at least one bottling from their diminishing stock of 1968 casks) things are looking good for the next few years for Glendronach. They’ve got some good plans in place to overcome their 6 year stock gap and their cask investment promises good things in the future. I look forward to some more big sherry cask beasts.

[…] that live in the tree opposite the distillery and in short I rather like it. I even said so in the blog post I wrote for work when I went through a bunch of their whiskies. My tasting notes from then read: Nose: Sticky black […] 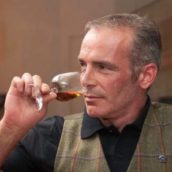