Chivas have launched a new range of cask strength single malts from extinct distilleries to compliment the Cask Strength Edition bottlings from their active distilleries.  ‘Deoch an Doras’ translates roughly as  ‘a drink at the door’ and refers to a dram for the road.  This Glenugie 1977 is one of two bottlings released to launch the range, the other being an Inverleven 1973 that I’ll be trying in the near future.  Both are limited to 500 bottles and are non-chilfiltered. 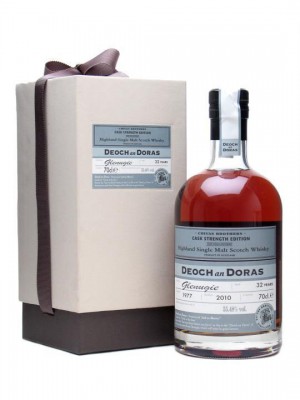 Glenugie was a coastal distillery, high up in the Eastern Highlands.  Founded as Invernettie in 1831 on the site of an old windmill, the distillery had a sporadic production history, beginning in 1837 (when the name became Glenugie) and finally ceasing for good in 1983, with the equipment being dismantled shortly thereafter.  Regrettably, the site is now home to a company specialising in ‘Intelligent Valve & Gas Turbine Solutions’, whatever that may mean.

Interestingly, one of my namesakes (and possible antecedent, I suppose, as my family is originally from that part of the world), Simon Forbes acquired the distillery in 1884 and ran it successfully until 1915 when distilling was curtailed by the Great War.

For more info about Glenugie, please check out Bob Hulsebosch’s excellent www.glenugie.nl, from where much of this info has been pinched.  Bob also corrected me when I wrote in my original web description that this was the first ever official bottling of Glenugie.  In fact it’s the second, as this photo he sent me of the label from a 1980s 5yo proves (even Sukhinder hadn’t encountered this one before): 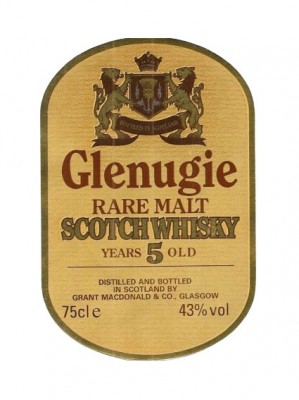 Most of the production went straight into blends and it’s rare to see even independent bottlings of Glenugie.  So we’d better crack on and see what this one’s like, eh?

Colour:  On the Colour Me Goodd scale I’m going to say that this is somewhere between titian and either castaneous or badious.

Nose:  Oh my.  The very first whiffs confirm what the colour had suggested – we’re talking very seriously good old sherry wood here.  Beautifully nutty with hints of dark chocolate, black forest gateau, some balsamico and the famed ‘old church pews’.  There’s so much going on here, if I started listing it all I feel sure the door would shortly be kicked in by the anti-maltoporn brigade on an urgent mission from Turckheim. Here goes:  Crushed almonds, Frazzles, old libraries, apricots, rosehip…Help!… Let go of me, you Alsatian bullys!!

Palate: Big and chunky mouthfeel.  The sherry is very prominent, there’s big woodiness, but lots of delicious fruit and honeyed sweetness to compensate.  Dense and almost bewilderingly deep. One of those wonderful drams that tastes slightly different every time you go back.  There’s a tremendous bitter dark chocolate note sitting alongside the thunderous oak underpinning everything.  I love the savoury qualities too, it’s not too sickly sweet. This is how sherry casks should be.

Finish:  As you’d expect, long and mouthwatering.  Savoury and slightly drying but not too tannic and certainly not too woody despite the age.  Even the last drop left for a half hour keeps coming up with wonderful new aromas.

Comment:  Well, bless my boots.  This is a really special whisky.  It goes without saying that sherryheads only need apply, and of course it’s not cheap – but this is fabulous stuff.  If I had a bottle I’d love to keep it for my grandkids to show them what great old sherried whisky was like – but I’m probably too selfish.  A fabulous, irresistible dram. 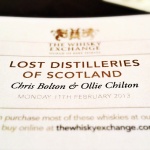