No Comments on Cocktails at The Whisky Exchange Whisky Show

As we get closer to our marvellous TWE Whisky Show (which is scarily only five weeks away) there will be a lot more information appearing about the things that we’re going to be doing, as…

8 Comments on A trip to Knockdhu

[This is Part 4 of Billy’s trip around the Inver House distilleries.  If you haven’t already, you should check out his scribblings from Balblair, Pulteney and Speyburn] After leaving Speyburn we hacked back over to…

No Comments on Music at the TWE Whisky Show – Tim Hain

We’re happy to announce that we not only have fantastic drinks and food lined up for the TWE Whisky Show but we now also have musical accompaniment thanks to the excellent Tim Hain. You can…

A trip to Pulteney

4 Comments on A trip to Pulteney

Leg 2 of my Inver House distilleries tour started off with a bit of a drive. Our departure point was Edderton, home of Balblair, and our destination was Wick, site of the Pulteney distillery. Scotland…

11 Comments on A trip to Balblair

The lovely folk of Inver House Distillers (the Scottish production wing of International Beverages) recently invited me along to a trip around four of their distilleries with a bunch of international bloggers. Not being one…

No Comments on Single Malts of Scotland Springbank 1999 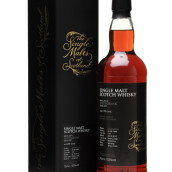 A quick post today about a new bottling that we’ve just got in from our sister company, Speciality Drinks Ltd, as part of the Single Malts of Scotland range – an 11 year old Springbank….

The chaps at Compass Box do seem to like keeping busy. After celebrating their 10th anniversary for most of last year they got their noses back to the grindstone and started work on some new…

Two bits of good news today, but in short: We are now delivering to Germany again Orders to Germany and Sweden will only get charged local duty – ie. they’re now even cheaper than before

After years of quietly sipping away at their whiskies, and occasionally selling a bottle or three, we are very proud to announce that The Whisky Exchange at Vinopolis has been invited to become an official…

The folks over at William Grant & Sons like a bit of interesting marketing. Their portfolio stretches outside of the world of whisky, with both Hendrick’s and Sailor Jerry Rum on the books, and over…