Australian whisky is on the up. This is far from a new thing, with Sullivans Cove French Oak picking up the World’s Best Whisky award at the World Whiskies Awards in 2014 and more distilleries springing up all the time. Despite the success, it’s still difficult to find Australian drams on the shelves on the UK. However, we have had a new one arrive recently – Starward from the New World Whisky Distillery.

I first heard about the whisky a couple of years ago, and more than anything, the bottle design grabbed me. I’m a sucker for beautiful labels and Starward ticks all the boxes – star maps, a pretty font and a name that’s a single letter away from being Star Wars. Unfortunately, it wasn’t available in the UK so I just lusted after a bottle from afar, keeping an eye on their website for news, and hoping that it also tasted good…

My wait, and yours, is now over, as Starward has made its way to the UK.

Unlike most Australian distillers, New World Whisky is based on the mainland, in Melbourne. It’s about as close to Tasmania – Australia’s distilling heartland – as you can get without falling into the sea, but has a different climate, thanks to being sandwiched between the cool sea and the country’s hot interior.

It’s a very Australian whisky, made with local barley and matured in apera casks. Apera’s a term that most people haven’t heard before – it’s the new name for Australian sherry. There are strict rules in Europe about where sherry can be made (which you can learn more about in my posts on sherry casks) so to be a good global citizen, and to open the door for exporting it to Europe, the Australian lawmakers have decreed that locally produced fortified wine can no longer be called ‘sherry’ and will henceforth be called ‘apera’. Be warned: if you ask for apera in Australia you will almost certainly get a blank look – other than on the labels, the name change doesn’t seem to have got all that far…

The flagship release of Starward is exclusively matured in old apera casks – the average age is more than 20 years old – and the casks are recoopered, resized and retoasted before being filled. They also use a variety of different sizes of cask which, along with Melbourne’s changeable climate, gives New World a good range of styles of spirit to play with when creating their whiskies. Outside of the current release of Starward, they’re still experimenting, with other types of cask quietly maturing, including some Australian Shiraz wine casks – the first release has already appeared, and it’s gone down very well. There’s definitely more to come. 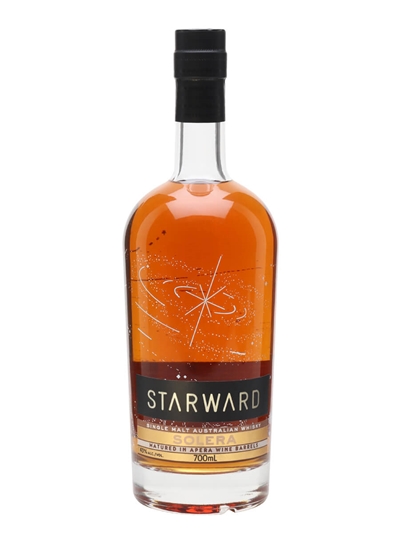 Palate: Thick and sweet, with golden-syrup sandwiches (on brown bread), malt loaf, ginger cake, speculaas and lebkuchen biscuits, and a background hint of black liquorice. As that calms down, the liquorice slowly becomes more minty and menthol, with a touch of milk chocolate and cherry jam sneaking in around the sides.

Finish: Fresh and leafy to start, with mint slowly fading to a sweet and chocolatey end.

Comment: While the spiciness on the palate suggests that this whisky is youthful, it has definitely picked up a lot of flavour in its time in wood and combines freshness with complexity. There’s a marked contrast between nose, palate and finish, but each element works well. In short – I’m a fan. It was worth the wait.

Reasonably priced at about £50, it’s now firmly on my list of world whiskies to recommend – tasty, pretty and not too dear.

It seems I am not their only fan, with Diageo’s Distill Ventures recently investing in the company. With some new cash behind them, as well as some rather canny early-days management of both money and casks, I’m hoping to see lots more from Starward and New World Whisky. Hopefully their next release won’t take quite as long to get to the UK.

#Whisky Starward – a New World Whisky: Australian whisky is on the up. This is far from a new thing, with Sull… https://t.co/RGScHnsvYp