A ripple of excitement went through the whiskey world last week when it was revealed that Pernod Ricard’s Irish Distillers Ltd, owners of the Midleton complex, were launching a cask strength version of arguably the distillery’s greatest brand: Redbreast 12 year old, a single pot still (as we have to call them now) whiskey that has gained a legion of fans thanks to its complex, yet drinkable well-sherried style. 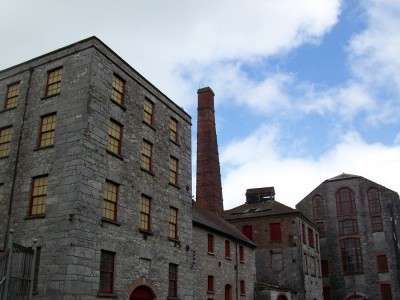 The old distillery buildings at Midleton

Like the sad fanboy that I am, I eagerly sought out the Midleton stand at the end of the first day of last weekend’s Whisky Live Paris (a terrific show, btw) and charged up with glass in hand, hoping not to be disappointed.  Mercifully the new Redbreast tasted fantastic, so I was thrilled when youthful IDL Distiller Liam Donegan very generously (and unbidden) presented me with the end of his sample bottle to take away with me (in hindsight, he may have just been trying to get rid of me.  If that’s the case, I don’t blame him).  This Redbreast is from a 68-cask batch, meaning there should be several thousand bottles to go around, and supposedly the proportion of sherry casks (the cask recipe) is exactly the same as for normal Redbreast 12yo.

I scurried back to our stand with the treasure and poured a sample for my colleague Chris Bolton (one of our Vinopolis shop’s finest nerds) and had to laugh when I saw the expression on his face as he stuck his impressive beak in the glass.  Chris opined that this was the kind of whiskey that, when you smell it, you know everything’s going to be ok.  This seemed to me a perfect summation: there’s something very comforting about a really top-class dram.  It’s a great feeling to just nose something and know you’re going to love it.

For the rest of the weekend the remains of the bottle stayed safely hidden under our table, with very occasional samples being poured for friends who hadn’t yet tried it, and one or two healthy drams being swilled on the remaining two evenings as the last of the guests were ushered from the building at the end of the show.

But back in cold, hard reality could the new Redbreast coupe la moutarde?  Perhaps in the excitment and fatigue of the show it was just the tonic for us weary travellers, gasping for a drop of nectar at the end of a footsore day sweltering in the Parisian heat?  I was pretty sure it wasn’t just a holiday romance and happily forked out for two bottles to bring home to Blighty to find out.  I was therefore even more chuffed when on my second day back, what should turn up on my desk but another bottle of Redbreast cask strength, courtesy of IDL’s PR bods.

It seemed the holiday romance was turning into something a little more serious, but I’m not the jealous type so I quickly divvied up the bottle with Billy.  Here’s our thoughts. 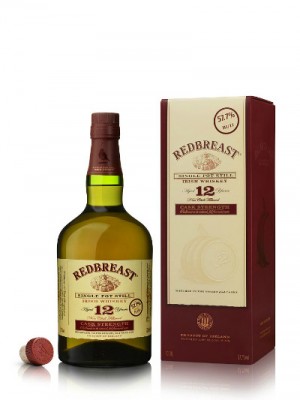 Palate: Not as sweet as the nose but big, oily and rich with a nice fieryness. Bitter, tannic wood runs down the sides of the tongue, and sour red grape and raisins dominate the middle with some dark fruit liqueur, grown-up fruit cake, fruity dark chocolate and a bit of olive oil. Water adds more spice and vanilla, and highlights the vine fruit, but it stays well away from syrupy sweetness.

Finish: Not all that long, with blackberry leaves hanging around after liquorice & blackcurrant sweets and toasted almonds fade away.

Comments: Reminiscent of obscenely sherried whisky but without being the over the top – it somehow manages to balance the sherry fruit and spice with the more delicate vanilla end of its flavour profile. A drop of water doesn’t turn it into regular Redbreast but keeps it big and spicy while keeping the fruit and light waxiness of the regular strength 12. I might have to grab a bottle of this…

Nose: Rich sherry notes contributing lifted brown sugar notes to the familiar potstill porridgey-ness: this is why potstill and sherry work so well in my opinion.  Freshly-polished oak – yes, it’s time to dust off the beloved ‘old church pews’ tasting note, which is never a bad thing. Develops raisin fudge, cocoa, cassis, honeyed oat bars, cake-icing, marzipan, macaroons; gets very syrupy and appley with a bit of time in the glass. I already know what the Forbes household will be drinking this Christmas.

Palate: A burst of oak, then the porridge and raisins muscle in.  Big and full-bodied with the wood staying in the foreground…but what wood! Lasting notes of bitter chocolate, coffee, burnt oat biscuits, blackcurrant lozenges and milky bran flakes add complexity. Concentrated raisin syrup, yet less sweet than the nose would suggest, but it’s by no means soft or flabby – there’s a real edge here, with plenty of welcome flinty minerality and oaky astringency to keep the tastebuds alert.

Finish: Dry, long, some bitterness; blackcurrant leaf and quite upfront bitey oakspices.  This is not a bad thing, in fact it just increases the urge to refill the glass.

Comments: Challenging in places and perhaps not for everyone, but I confess that this is dangerously close to my favourite Irish whiskey ever, maybe even my perfect Irish dram.  People approaching Irish whiskey for the first time should probably start elsewhere; for lovers of the style, this is a new benchmark and, in this blogger’s opinion, deserving of a place in the pantheon alongside the first edition 15yo.  There, I said it.

Redbreast 12 has got to be one of the best bargains in the whisk(e)y world.

Quality is consistently not only high, but *very* high!

Looking forward to this a great deal…

Hoping to try this one tonight at Stockholm Beer & Whisky Festival. 🙂

[…] experiences when drinking this, I point you to tasting notes of the Redbreast 12 Cask Strength on The Whisky Exchange blog and The Whisky Wire websites. Both are well worth the read. If you are even remotely into your […]

[…] next few years, Irish whiskey’s popularity began to soar, and in 2011 Irish Distillers launched Redbreast 12 Year Old Cask Strength. They followed it with Redbreast 21 Year Old in 2013, and the limited-edition Redbreast Mano a Lamh […]

[…] next few years, Irish whiskey’s popularity began to soar, and in 2011 Irish Distillers launched Redbreast 12 Year Old Cask Strength. They followed it with Redbreast 21 Year Old in 2013, and the limited-edition Redbreast Mano a Lamh […]